An official with Busan said Cho collapsed near his residence in the morning while on his way to work. Cho was rushed to a nearby hospital but was pronounced dead.

Cho was one of South Korea's top football prospects in the 1990s. An energetic attacking midfielder, he played for South Korea at the FIFA U-20 World Cup in 1991 and 1993, before making his senior international debut in 1994.

Cho was the youngest player on the South Korean roster for the 1994 FIFA World Cup in the United States, where he featured in the national team's 3-2 loss to Germany in the group stage. He also played for South Korea at the 1994 Asian Games in Hiroshima, Japan. Cho ended his national team career with two goals in 13 matches.

Cho started his pro career with Pohang Atoms (now Pohang Steelers) as the top pick in the 1994 K League draft. He later played for Bucheon SK (now Jeju United) and Seongnam Ilhwa Chunma (now Seongnam FC) before hanging up his boots in 2002.

Cho's coaching career began in 2003 with Bucheon where he worked until 2010. He then joined Jeonnam Dragons as an assistant coach in 2011 and moved to Daejeon Citizen FC two years later.

After serving one season with Daejeon as interim manager, Cho was officially promoted to head coach in 2014. That same year, he led the club to earn a promotion to the first division K League Classic by winning the second-tier K League Challenge.

Cho then became head coach of the first division outfit Sangju Sangmu for the 2016 season and guided the military club to the upper group in the Classic's split system, where the top six clubs vie for the championship within their group after 33 league matches.

Following his success, he moved to the second division club Busan this season with a task to earn a promotion. Under Cho's guidance, Busan are currently in second place with 61 points this season, nine points behind leaders Gyeonggnam FC with seven matches left to play.

"I first thought people were joking," said Suwon Samsung Bluewings head coach Seo Jung-won, who played with Cho at the 1994 World Cup. "We were close and once roommates. It's really sad. I can't believe it."

Cho is survived by his wife and two children. 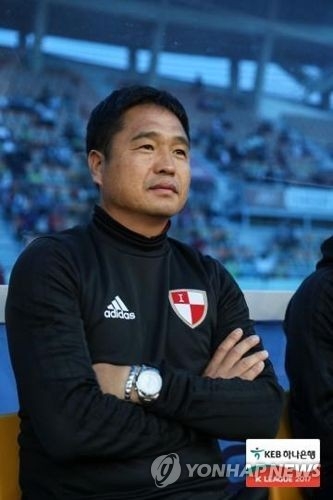