(ATTN: UPDATES with more details on indictment throughout)

The prosecution arrested Ha late last month as part of a probe launched in July into a string of irregularities involving some top officials of the defense company, including price manipulation, accounting fraud and backdoor hiring.

Ha stands accused of playing a key role in cooking the books by inflating 535.8 billion won in sales and 46.5 billion won worth of net profits from 2013 to the first quarter of this year.

Ha took out 651.4 billion won in loans and sold corporate debts based on the fraudulent balance sheet, they said.

The 66-year-old stepped down as the CEO in July soon after the investigation began.

Ha is also accused of embezzling about 7.3 billion won as bonuses, while siphoning at least 460 million won off company funds through buying gift vouchers in large quantities and "laundering" them in cash.

The prosecution also believes he owns a major stake in KAI's subcontractor under a borrowed name.

He was also solicited to recruit some 15 unqualified candidates into the company because they had special ties with influential people, such as politicians, military officials and a ranking public servant. He has denied any wrongdoing.

Prosecutors have indicted a few KAI officials who were in charge of the key development projects for inflating the prices to gain illegal profits. KAI has been involved in aircraft manufacturing and selling their products, which are worth as much as 1 trillion won per deal, here and overseas.

The government established KAI in the wake of the Asian financial crisis in the late 1990s by combining ailing private defense companies. It injected about 8 trillion won worth of taxpayer money to salvage the firm. 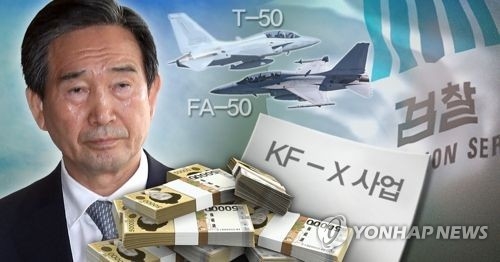