Shin Ryong-man, who was newly named a director of the WPK's central committee, may have become the head of Office 39, according to Lee Gee-dong, a senior research fellow at the state-run Institute for National Security Strategy.

Office 39 is called the leader's "personal safe" for its role in raising and managing secret funds and procuring luxury goods.

Shin, who had served as vice chief of Office 39, is presumed to have replaced his predecessor Jon Il-chun, the head of Office 39, Lee said.

"It seems that Jon's activity might be restricted as he is blacklisted," Lee said. Jon is among the North Korean individuals blacklisted by the European Union. 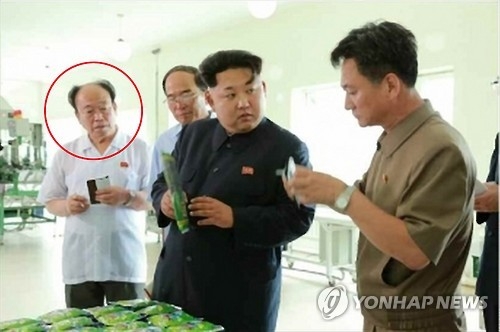 Lee also said that Ri Man-gon, a key party official overseeing missile development, is projected to have been sacked from his post.

Ri, director at the party's munitions industry department, was not included on a list of key 25 officials who sat on elevated stages along with leader Kim Jong-un at a party event on Sunday.

Ri is a key official in charge of North Korea's development of its nuclear and missile programs including the launches of Hwasong-14 intercontinental ballistic missiles (ICBMs). He was blacklisted by the United Nations and the U.S. over his role in missile development.

Lee said that the munitions director usually doubles as a party secretary in charge of Jagang Province bordering China. Ju Young-sik, a member of the WPK's central committee, is now handling provincial affairs.

North Korea conducted the reshuffle of party personnel at the WPK's plenary meeting on Saturday. The North's state media said that Ju was among those who were named directors of party departments, without elaborating.