SEOUL. Oct. 16 (Yonhap) -- The South Korean and U.S. navies on Monday kicked off massive combined drills off the coast of the peninsula amid heightened tensions.

The allies plan to continue the Maritime Counter Special Operations Exercise (MCSOFEX) through Friday in the East Sea and the Yellow Sea, also known as the West Sea.

The carrier strike group will train with South Korean warships and other defense assets, such as the Sejong the Great Aegis ship and P-3 Orion anti-submarine aircraft in the East Sea. 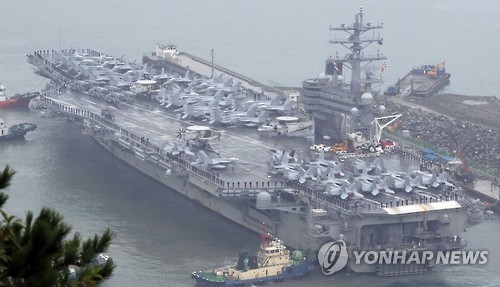 A unit of U.S. special forces tasked with carrying out "decapitation" operations is aboard a nuclear-powered submarine in the group, according to a defense source.

Among other assets mobilized are F-15K, FA-18 and A-10 fighter jets, as well as AH-64E Apache attack helicopters, Lynx and AW-159 Wild Cat naval choppers.

The joint training is aimed at promoting "communications, interoperability and partnership in the (U.S.) 7th Fleet area of operations," the fleet said.

It initially announced that the practice around the peninsula will end next Thursday but later corrected the date to Friday.

Meanwhile, the U.S. has sent a B-1B Lancer strategic bomber, F-22 Raptor stealth fighter jets and several other types of high-profile defense assets to the Seoul air show to open this week.

"Approximately 200 U.S. personnel are expected to participate in the Seoul International Aerospace and Defense Exhibition (ADEX) 2017, scheduled from Oct. 17-22 at the Seoul K-16 airport," the 7th Air Force said.

More than 400 defense firms from 33 countries plan to participate in the ADEX to begin Tuesday.