SEOUL, Oct. 20 (Yonhap) -- A state commission was to unveil the results of a high-stakes survey on whether to abandon or continue the construction of two unfinished reactors Friday after months of heated debates about whether it's the right time to begin weaning South Korea off nuclear energy.

Abandoning the Shingori-5 and Shingori-6 reactors, which have been under construction in the southeastern city of Ulsan since last year, was one of President Moon Jae-in's campaign promises. But rather than carrying out the pledge, Moon decided to make a final decision according to public opinion.

The government then suspended the reactors' construction and established the independent commission in charge of collecting views from the public and making a recommendation. Since August, the commission formed a jury and provided them with information on the merits and demerits of the project.

The 471-member jury spent three days together in a debate camp over the past weekend, during which they heard opposing arguments from experts representing both sides. At the end of the camp, the commission conducted a final survey of the jury, and based on its results, drew up its recommendation to the government.

Government officials said that they would accept whatever decision the commission makes.

The reactors were about 30 percent complete before their construction was suspended in July. About 1.6 trillion won (US$1.4 billion) had already been spent on the project. 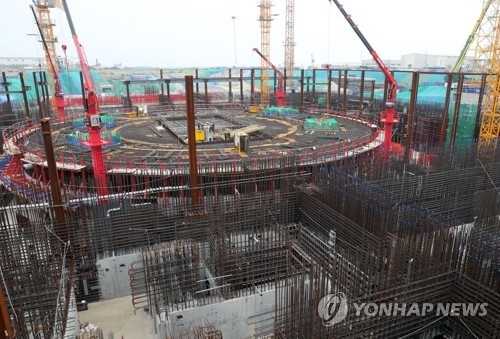 The proposal to abandon the reactors sparked heated debate in a country that relies on nuclear power plants for about a third of its electricity. Proponents say the country should phase out nuclear power for safety and environmental reasons, but opponents say it will lead to a shortage in the power supply and a spike in electricity bills.

Moon believes South Korea should lessen its dependence on nuclear power and increase the use of renewable energy. But he has stressed that the government will gradually close reactors one by one when their lifespan is up, rather than rushing to shut them down early.

He said it could take up to 60 years for South Korea to completely phase out nuclear power.

The public appears to be evenly divided.

Four Gallup surveys have shown that percentages of those supporting and opposing the reactor project are of only a few percentage points apart or even within the margins of error. This week's survey by Realmeter also showed only a 0.6 percentage point difference, with 43.8 percent in favor of abandoning the project while 43.2 percent support resuming the construction.

That would mean that the government has to make a final decision on its own. The government is expected to take up the issue during a Cabinet meeting to be presided over by Moon on Tuesday.

Calls for scrapping the reactor project gained traction after a powerful 5.8-magnitude earthquake hit the country's southeastern city of Gyeongju in September last year. It was the most powerful quake ever recorded in South Korea.

The quake sparked safety concerns about the reactors being built just dozens of miles away amid a new discovery that the region lies on an active fault prone to quakes. Anti-nuclear activists have called for scrapping the project arguing that the country could face a disaster similar to that of Japan's Fukushima nuclear accident caused by a powerful earthquake.

The region is already home to six nuclear reactors, with two more set to go into operation starting next year. The Shingori-5 and Shingori-6 reactors would bring the total number in the region to 10.