CHANGWON, South Korea, Oct. 20 (Yonhap) -- As pitching goes, this has not been a pretty series between the Doosan Bears and the NC Dinos, with the Korea Baseball Organization (KBO) clubs locked in an offensive battle of massive proportions.

The Bears beat up on the Dinos 14-3 on Friday to take a 2-1 series lead in their second round postseason series at Masan Stadium in Changwon, 400 kilometers southeast of Seoul.

Min Byung-hun hit a grand slam for the Bears, which became the first club ever to hit a slam in two straight postseason games.

But lost in the shuffle was a small battle within the game, and the Bears won that one, too. 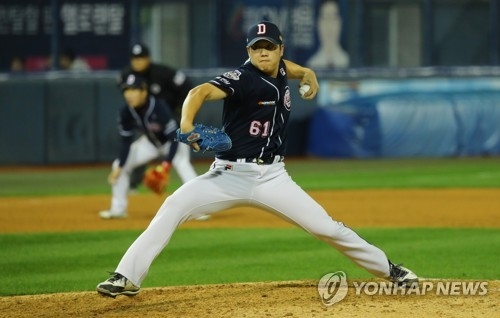 With so many runs being scored, the bullpens for both teams have taken a beating in this series. But on Friday at least, the Bears' relief corps put up some zeros on the board, while the Dinos' bullpen once again crumbled in the face of a Doosan onslaught.

Both starters were far from sharp in this one. NC's Eric Hacker walked five in 3 2/3 innings, giving up seven runs on five hits, including two home runs.

The onus fell on the bullpens once again, and the Bears' relievers rose to the occasion.

Bowden left with the Bears leading 7-3, and Ham Deok-ju took over with a man at first. He got a flyout off the bat of No Jin-hyuk, and the Bears' defense doubled up the runner at first, Park Min-woo, after some horrendous baserunning mistakes.

Ham gave up a single but got out of the inning by getting Xavier Scruggs to pop up to second.

And Ham was perfect the rest of his evening. He had a three-up, three-down inning in the fifth, and retired the first two batters of the sixth before handing the reins over to Kim Seung-hye. 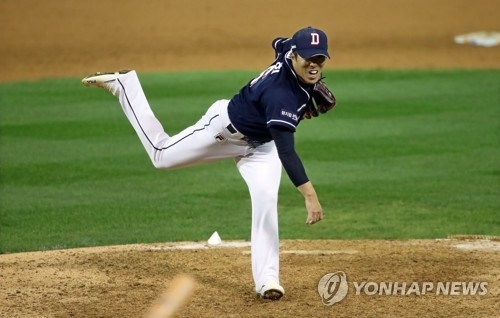 Ham was credited with the win thanks to 2 2/3 innings.

The Bears exploded for seven runs in the top sixth to take a 14-3 lead. The the Bears bullpen breezed through the deflated Dinos lineup. Kim, Lee Yong-chan and Kim Myeong-sin gave up just two more hits combined over the final 3 1/3 innings.

In stark contrast, five NC relievers were torched for seven runs on just five hits. They were undone by three walks.

Lim Chang-min, the team's closer pitching for the first time since last Sunday, was particularly disappointing. He faced six batters and gave up three hits and walked one with the bases loaded. The right-hander was charged with two earned runs.

Ham was so great that even his manager Kim Tae-hyung said the left-hander was the key to victory, not the offensive explosion.

"Bowden had decent stuff, but I think he felt some pressure," Kim said. "And sending in Ham early in the game helped us a great deal."

NC manager Kim Kyung-moon said he'd hoped Hacker would pitch deeper. Hacker was the Dinos' best starter in the previous round, when he gave up just a run in 13 1/3 innings against the Lotte Giants. But when he failed to live up to the manager's expectations, it threw everything out of whack.

"I didn't expect Eric Hacker to struggle so early in the game," the losing manager said. "I wanted to use Lim Chang-min in a close situation. But we fell back by so much that I couldn't figure out when to use him."

Before the game, the Bears had a bullpen ERA of 9.82 in this series, while the Dinos' relievers had an even uglier 12.19 ERA.

No starter has been credited with a win in this series, and with the offenses scoring with shocking ease -- teams have now scored 59 runs in three games -- there has been added pressure on bullpens on both ends.

And on this night, the Bears had the upper hand. 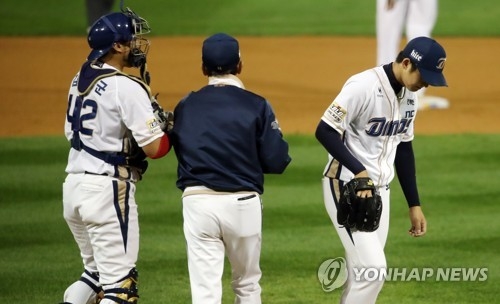