Yang finished off the Tigers' 7-6 victory over the Doosan Bears in clinching Game 5 of the Korea Baseball Organization (KBO) championship series at Jamsil Stadium in Seoul. After throwing a complete game shutout in the 1-0 victory in Game 2, Yang tossed a scoreless ninth on Monday for the save.

He earned 48 out of 74 votes from the media for the honors, after throwing 10 shutout innings in two appearances.

Yang held the Bears to just four hits and struck out 11 in a gutsy performance in Game 2 last Thursday, when he threw 122 pitches. 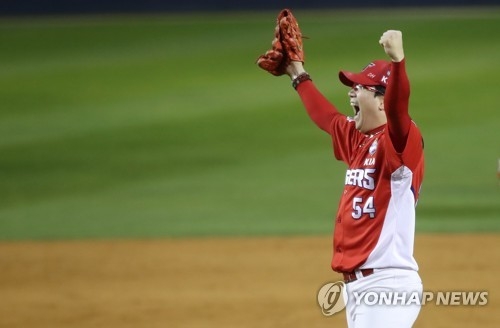 And he kept thousands of Kia fans on their toes with the nail-biting save on Monday.

With the Tigers having nearly blown a 7-0 lead and nursing a 7-6 advantage, Yang took the mound to face Kim Jae-hwan, the ever-dangerous cleanup hitter for the Bears. Yang walked him on five pitches.

After one out, Jo Soo-haeng laid down a bunt, and third baseman Kim Ju-hyung's throw to first was wide, allowing the runners to reach second and third.

Yang walked the next batter to load the bases and bring the force play into equation.

And that's exactly when Yang dug deep and took care of business.

He got Park Sei-hyeok to hit a soft liner to shortstop. And he could now breathe a bit easier facing Kim Jae-ho, who was in a 0-for-9 funk in the series and was benched at the start of the game.

Kim swung on the first pitch and popped out to the catcher, as Yang raised his arms in the wild celebration that ensued around the mound.

Kia outfielder Roger Bernadina also had a strong series, batting .526 (10-for-19) with a team-high seven RBIs. But he managed just 24 votes to finish a distant second to the left-hander. 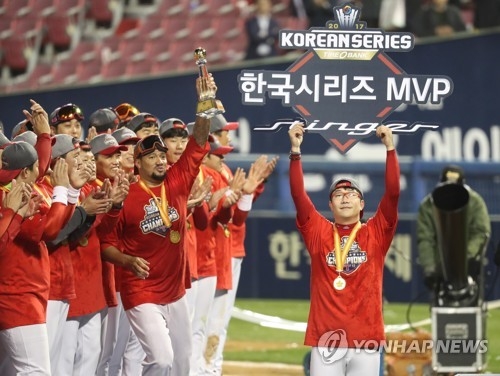 Yang said afterward he was determined to finish the series in five games, so as not to give the Bears any more hope.

"I was feeling great, and I trusted my fastball," Yang said. "I think heaven helped me, too."

Yang enjoyed the best regular season of his career by winning 20 games for the first time. And that 1-0 victory in Game 2 was the first 1-0 shutout in the Korean Series history.

"This has been a dream season," he said. "I've dreamed about finishing off a championship game for a long time, and everything became a reality."