The Tigers edged out the Doosan Bears 7-6 to claim the Korean Series in five games on the road at Jamsil Stadium in Seoul. After dropping the first game at home in Gwangju, 330 kilometers south of Seoul, the Tigers won four straight games to knock out the two-time defending champions.

The last three of those wins came at Jamsil, where the Tigers' famously enthusiastic fans packed half of the 25,000 seats.

"Our fans deserve all the credit," Kim said at a press conference, his eyes still red from the tears during the on-field celebration. "We all fed off their energy. We'll never forget their support." 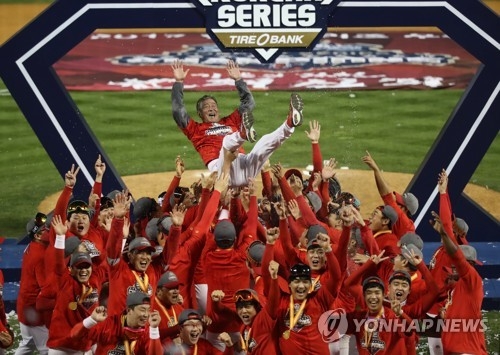 This was Kim's first title either as player and manager.

"I never cried; it's the champagne you see on my face," Kim deadpanned. "I don't even remember if I cried or not. I am just so happy right now."

The Tigers opened a 7-0 lead early but let the Bears creep all the way up to 7-6 with a six-spot in the seventh inning.

Nursing that one-run lead heading into the bottom ninth, Kim summoned his ace Yang Hyeong-jong to close out the game. He'd thrown a complete game shutout in Game 2 last Thursday, and came up once again in a big spot.

Yang overcame a leadoff walk and a throwing error by third baseman Kim Ju-hyung to lock down the win. The Bears stranded the bases loaded when Yang got a line out and a pop out to end the one final threat.

"If Yang hadn't been able to finish the game, it would have put us in trouble (for future games in the series)," Kim said. "It wasn't easy but he got the job done."

The Tigers won the regular season title and advanced straight to the Korean Series. After a three-week layoff while the postseason was ongoing, the Tigers looked a bit sluggish in losing the opening game 5-3.

Then Yang twirled that shutout in Game 2, and the rest was history.

"So much has happened this year, and everyone, from the players to the front office, came together to finish the year on a great note," Kim said. 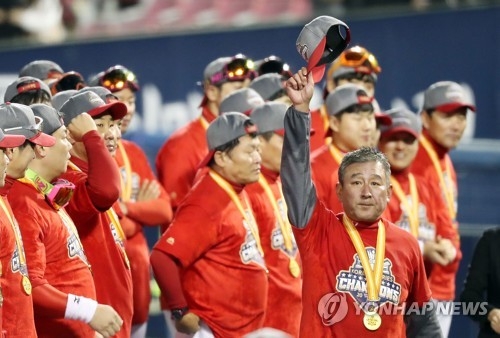 Manager for baseball champions thanks well-traveling fans for support

Manager for baseball champions thanks well-traveling fans for support