With South Korea being the Guest of Honor for this year's event, Turkish students flocked to the pavilion by twos and threes to get a rare glimpse into Korean culture amid the global boom of Korean pop music, television dramas and films known as "hallyu." 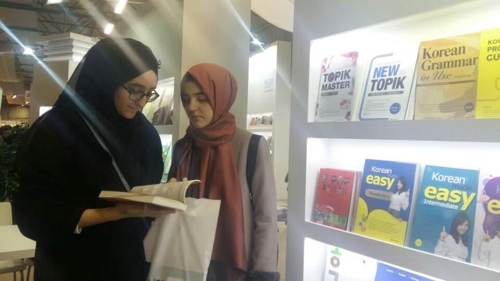 Although Korean literature took up the largest part of the Korean pavilion, more popular were Korean magazines and picture books for the young Turkish visitors.

The booth of the Korea Magazine Association, which displays the major magazines published in the country, was crowded with Turkish teenagers and college students coming to see entertainment magazines featuring news on "hallyu" celebrities. They exclaimed loudly whenever they found the latest photos of their favorite stars in the magazines. Some of them had an impromptu K-pop dance battle at the booth.

"I didn't know it (Korean pop culture) would be so popular," said Jeong Gwang-yeong, chairman of the association. "I'm considering making photo books of Korean stars and bringing them for display next year."

The association said it has decided to donate some 400 magazines currently on display at the book fair to Turkey after the fair wraps up. 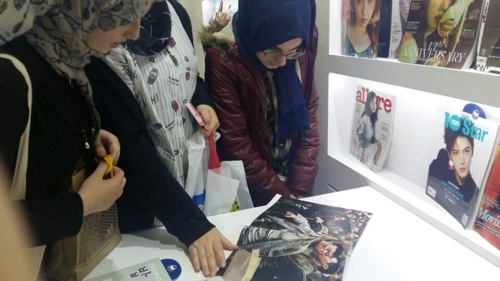 Also popular were Korean picture books since the Turkish people could easily understand the content without any knowledge of the Korean language.

"Actually, they have no interest in Korean books full of text but picture books are popular," said a Turkish volunteer who guided visitors at the Korean pavilion. "Many people say their illustrations are pretty."

In the Darakwon booth where Korean language textbooks were displayed, inquiries from the Turkish people were frequent. Most of them were students attending high schools and colleges eager to learn the language because of the influence of K-pop and TV dramas.

But some people complained about the lack of proper Turkish information on Korea and its culture besides K-pop and dramas.

One 16-year-old visitor said, "I'm interested in Korea but don't have much to read even on the Internet."

The 36th Istanbul book fair is to run until next Sunday with more than 800 publishers and nongovernmental organizations from 18 countries around the world in attendance. 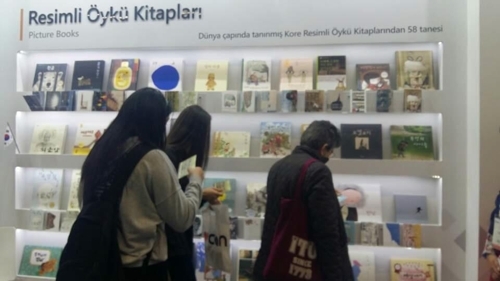