SEOUL, Nov. 6 (Yonhap) -- K-pop boy band Super Junior said Monday they are saddened by Choi Siwon's temporary removal from the group's activities, but vowed to use it as an opportunity to integrate themselves more into the team.

"We feel terrible and very sad because Siwon cannot be with us," Leeteuk, the band's leader, said during a news conference for the group's eighth full-length album at a hotel in southern Seoul. "Our past 12 years have been eventful, but we didn't give up, and we overcame all of our troubles. (These troubles) became chances to integrate ourselves more. The remaining members will try to move a step closer to fill his vacancy." 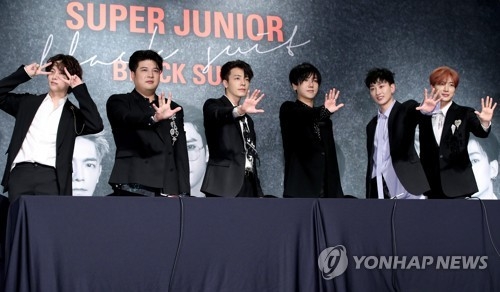 Label SJ said last week that Choi will be absent from the group's forthcoming broadcasting activities for its eighth full-length album "Play" after a recent fatal accident involving his family's pet dog.

Choi and his family have come under fire for failing to properly restrain their French bulldog, named Bugsy, which attacked a neighbor, who subsequently died in hospital last month.

When asked if they cut out scenes featuring Siwon in the music video for the album's main track "Black Suit" due to the recent issue, Eunhyuk flatly said, "No." 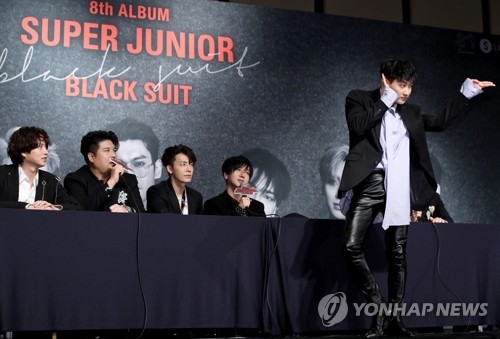 "If we remove certain parts, the flow of the music video would be broken and its quality would be affected," he explained.

During the press conference, Heechul opened up about his physical condition.

He said he has suffered from malicious comments on the Internet since he received an ankle injury in a car accident 11 years ago.

"I hate to admit it, but I got older, and the hospital told me to steadily receive rehabilitation treatment and take care of my ankles," he said. As some netizens kept accusing him of intentionally having his ankle injured in order to evade mandatory military service, he wrote on Instagram last month, "I will probably not be able to work normally. I'm not confident at all."

All able-bodied South Korean men must serve in the military for approximately two years.

Heechul said he did so because he felt a strong need to let his fans know of his bad physical condition. 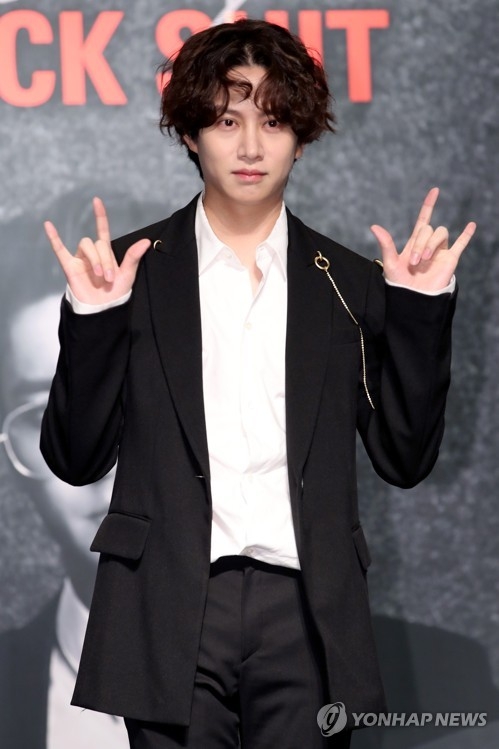 Super Junior then shifted the topic to the new album, the first in two years and two months since the release of the special album to mark the band's 10th anniversary in 2015.

Of the group's 11 members, only six -- Leeteuk, Eunhyuk, Yesung, Donghae, Heechul and Shindong -- will take part in the album's promotional activities. Kangin was excluded after driving under the influence of alchol last year while Sungmin was also dropped from the lineup in light of long-running accusations by fans over his supposed lack in effort to connect with them. Ryeowook and Kyuhyun were left out as they are currently serving out their military duties. 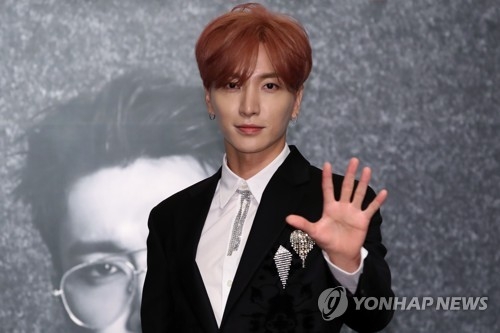 The main track, "Black Suit," is a carefree minor dance pop song with a brass rhythm and restrained melody. The song portrays a man who is wearing black suit to steal the mind of his love interest.

"Many people are worried that the dance would be tiring for us since we're in our thirties, but we prepared a gorgeous performance sparing no effort. We hope you'll watch the choreography for 'Black Suit,'" Eunhyuk said.

Leeteuk expressed hope that Super Junior could still be a rival to new idol groups, even after so much time had passed.