(ATTN: UPDATES with reports of a joint press conference by the two presidents, minor changes in paras 7-10, 19-26; ADDS photos)
By Byun Duk-kun

Moon arrived in Indonesia on Wednesday for a three-day state visit to further enhance diplomatic ties, labeled "strategic partnership" in 2006.

They agreed to work together to ensure that the strategic partnership goes beyond the bilateral context and strategically converges to contribute to peace, stability and prosperity in the region and the world, according to a joint statement released by Seoul's presidential office Cheong Wa Dae.

"The two leaders agreed to elevate the bilateral relations to a 'Special Strategic Partnership,'" it said. 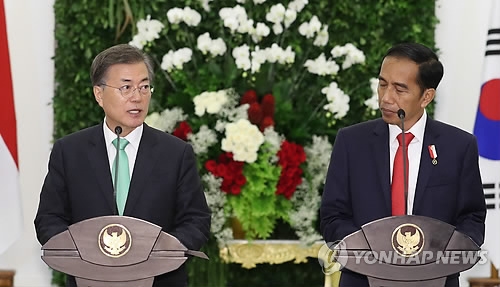 The new definition of relations places greater emphasis on concrete cooperation for the benefit of the two countries and their peoples in various fields, particularly in key industries and infrastructures, the statement explained.

"We agreed to upgrade the Korea-Indonesia relationship to a special strategic partnership so it will become a cooperative relationship that will help ensure peace and prosperity of not only the two countries but all of Asia," Moon said in a joint press conference with his Indonesian counterpart following their bilateral summit at Bogor Palace, located on the outskirts of Jakarta.

Widodo noted the South Korean leader's trip to his country itself highlighted the importance Moon places on their bilateral relationship.

"President Moon's visit to Indonesia marks his first trip to an Association of Southeast Asian Nations (ASEAN) member country. That represents President Moon's strong commitment to continuously expanding the relationship between the two countries," he said.

The leaders also agreed to explore a "two-plus-two" meeting involving their foreign and defense officials that will come in addition to the countries' Ministerial Joint Commission and Vice Ministerial Strategic Dialogue, according to their joint statement.

As part of efforts to increase the exchange of people, Seoul agreed to simplify its visa issuance procedure for Indonesian tourists to South Korea, according their statement.

They also agreed to support each other to make the 2018 Winter Olympic Games and Paralympic Games in South Korea's Pyeongchang and the 2018 Asian Games in Jakarta a success.

"The two leaders agreed to explore ways to utilize those sporting events for the facilitation of people-to-people exchanges between the two countries," they said in their joint statement. 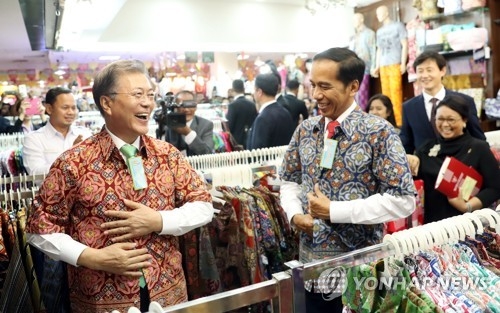 Moon and Widodo pledged the bilateral cooperation will spread to regional and global issues, including the North Korean nuclear standoff.

"The two leaders expressed grave concern over North Korea's sixth nuclear test and multiple launches of ballistic missiles which constitute a serious challenge to international peace and security," the statement said, referring to the communist state's latest and most powerful nuclear test staged on Sept. 3.

"The two leaders reaffirmed their support for the complete, verifiable and irreversible denuclearization of the Korean Peninsula and urged North Korea to immediately comply fully with its obligations under relevant United Nations Security Council (UNSC) resolutions."

Widodo reaffirmed his support for Seoul's efforts to peacefully denuclearize North Korea during the press conference.

"To Indonesia, North Korea is an issue that all U.N. members must worry about. That is for the denuclearization of the Korean Peninsula. (North Korea) must stop its ballistic missile tests. I also praise President Moon for continuing to keep the door open for dialogue," he said, according to South Korean pool reports.

Moon expressed gratitude, saying the countries will continue to work together to bring North Korea to the dialogue table.

"We have agreed to continue working closely together to bring North Korea to denuclearization dialogue by utilizing all available diplomatic means while preventing North Korean provocations for a peaceful resolution of the North Korean nuclear issue," he said.

"I again thank President Jokowi and the people of Indonesia for your warm hospitality," Moon said, referring to his Indonesian counterpart by his popular nickname.

"Especially, I thank the people of Jakarta for your warm welcome and support despite great inconveniences you may have experienced due to traffic control," he added.

The South Korean leader was set to head for Vietnam on Friday, ending his three-day trip here.