"The two leaders agreed on the need to maintain their basic stance of putting strong sanctions and pressure on the North until North Korea voluntarily gives up developing nukes and missiles and comes out for dialogue," Cheong Wa Dae said. 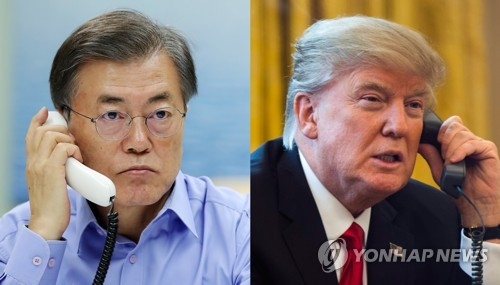 The hour-long telephone conversation held late Thursday (Seoul time) came one day after the North launched an apparent intercontinental ballistic missile in its first provocation in two and a half months. The call marked the second of its kind in two days.

Moon said it was not clear whether the communist has in fact built nuclear weapons, let alone perfected its missile technology.

"The missile launched yesterday certainly was the most advanced one so far in all aspects, but the reentry technology has not yet been proven, and it is also uncertain whether the North has secured the technology to miniaturize nuclear warheads," he told the U.S. president, according to Cheong Wa Dae spokesman Park Soo-hyun.

"The task we face is to completely prevent North Korea from further advancing its nuclear and missile technologies, and eventually to have them dismantled," Moon added.

To this end, the two leaders said they will seek to intensify international sanctions and pressure against the North to the maximum level.

"President Trump praised our government's such efforts, and underscored the need to deter provocations and counter threats from North Korea with overwhelming power based on the strong joint defense posture of South Korea and the United States," Park said in a press release.