The country's gross domestic product (GDP) expanded 1.5 percent in the July-September period from the previous quarter, up 0.1 percentage point from earlier estimates, according to the preliminary data from the Bank of Korea (BOK).

The on-quarter growth accelerated from a 0.6 percent on-quarter expansion three months earlier and marked the fastest since the second quarter of 2010, when the economy rose 1.7 percent.

From a year earlier, the local economy grew 3.8 percent in the third quarter, compared with a 2.7 percent on-year expansion in the previous quarter.

Government spending expanded 2.3 percent on-quarter on a rise in health insurance premiums, and construction investment gained 1.5 percent due mainly to the growth of residential building construction. Facility investment edged up 0.7 percent in the third quarter.

Consumer spending grew 0.8 percent in the third quarter from three months earlier, while exports jumped 6.1 percent during the same period on increased shipments of chips and chemical products.

Meanwhile, the BOK said the country's real gross national income rose 2.4 percent in the July-September period from a quarter earlier thanks to improving terms of trade. 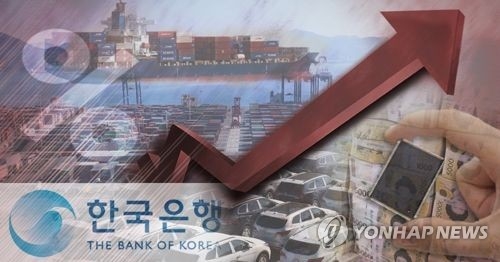