Kang and Japanese Foreign Minister Taro Kono discussed her possible visit during a telephone conversation two days earlier over North Korea's long-range missile launch, and agreed to have their ministries arrange detailed schedules of the visit, according to sources.

"Specific details have yet to be determined, but South Korea is fine-tuning the visit with Japan to take place within this month," one of the sources noted.

Since taking office in June, Kang traveled to South Korea's most important neighbors -- the United States, Russia and China -- except for Japan.

A historical feud stemming from Japan's wartime sexual exploitation of Korean women is likely to be high on their agenda when the two ministers meet, along with their collaboration to deal with North Korea's advancing nuclear and missile weapons programs.

Under the previous administration of impeached President Park Geun-hye, Seoul reached a deal with Japan on December 2015 to end the so-called comfort women feud once and for all in exchange for Japan's state fund to support the Korean victims.

The new Moon Jae-in administration, however, dismissed the deal as falling short of the South Korean people's approval and is currently investigating the background of the deal's making.

Kang and Kono are also expected to discuss how to improve summit-level diplomacy between the two neighboring countries when they possibly meet this month.

The top diplomats have held three meetings over the past months but only on the sidelines of international events outside of South Korea and Japan. 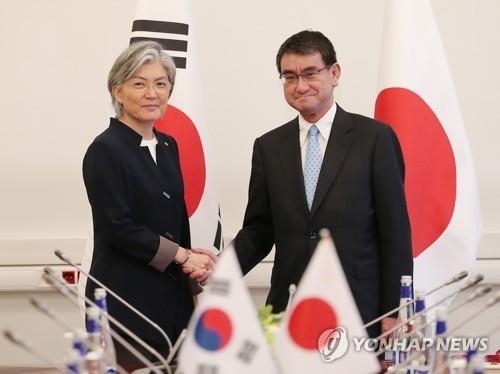