(ATTN: RECASTS headline, lead; UPDATES with reports of the outcome of the meeting in paras ; RESTRUCTURES; ADDS photo)

SEOUL, Dec. 1 (Yonhap) -- President Moon Jae-in on Friday met with a group of South Korean and U.S. soldiers guarding the border with North Korea to commend them on the way they handled the recent defection of a North Korean soldier through the heavily fortified border.

"I invited you here because I wished to personally express my gratitude as the president of the Republic of Korea," Moon said during a 30-minute meeting at Cheong Wa Dae with the South Korean and U.S. troops stationed at the Joint Security Area, according to Cheong Wa Dae pool reports.

"At the time of the defection, you managed the situation very correctly and calmly. Thanks to you, the incident did not develop into a more dangerous situation," he added. 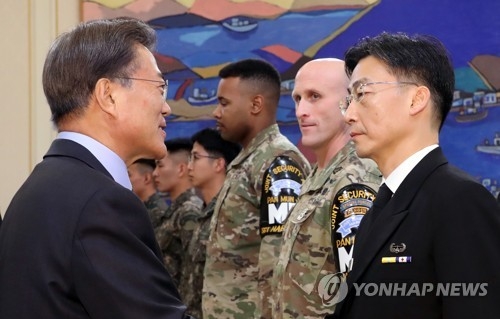 The JSA, also known as Panmunjom, is one of the very few places where South and North Korean troops stand face to face without a fence dividing them. The already perilous area recently become a hotspot when a man believed to be a North Korean soldier defected to South Korea through a painted inter-Korean border at the JSA on Nov. 13.

Moon's remarks come amid opposition criticism that the troops stationed there should have returned fire when North Korean guards fired upon the defector even after he had crossed the border to the South.

"I am well aware of how sensitive and dangerous the area is. The situation did not turn into a crisis because you controlled the situation calmly and accurately," the president said.

The North Korean defector was said to have suffered at least five gunshot wounds to the abdomen and other parts of his body. For a time, he was in a critical condition while undergoing treatment at a hospital in Suwon, just south of Seoul, but is now said to be stable.

Friday's meeting also involved the surgeon who operated on the defector.

The president noted that the doctor, as well as the JSA troops, helped to both save the defector and maintain peace.

"I again thank you all who together defended peace and saved the life of the North Korean soldier who defected to our country," he said.