SEOUL, Dec. 1 (Yonhap) -- The ruling Democratic Party on Friday renewed a plea for opposition parties' cooperation in passing the government's 2018 spending plan with the legal deadline for the budget approval just one day away.

Rep. Woo Won-shik, its floor leader, reiterated that the budget plan worth 429 trillion won (US$395 billion) is vital for enhancing people's livelihoods and spurring growth, amid a deadlock over several sticking points, including a proposal for job creation.

"I urge (opposition parties) not to leave any dishonor on their track record by missing the deadline," Woo said during a meeting with senior party members. 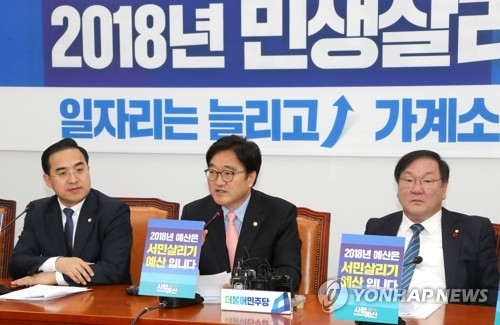 "At a time when the economy and security are unpredictable, people would become concerned should the passage of the budget bill be delayed. It is urgent for us to pass the bill to stabilize people's livelihoods," he added.

Under Thursday's cross-party deal, the rival parties have to finish their negotiations by Saturday noon. But they have so far refused to make any major concessions, raising the prospect of a delay.

Major bones of contention are a proposal to use 534.9 billion won to support President Moon Jae-in's push to create 174,000 new public service jobs by 2022 and the 3 trillion-won plan to bankroll next year's minimum wage increase.

The minor opposition People's Party has vehemently opposes the job growth plan, warning it would impose an undue burden on future generations.

The passage of the spending bill requires the cooperation of the People's Party, which has 40 lawmakers, as the ruling Democratic Party has only 121 parliamentary seats, far short of a majority in the 299-member unicameral legislature.