SEOUL, Dec. 1 (Yonhap) -- South Korean farmers and stockbreeders on Friday opposed any additional market opening when South Korea renegotiates its free trade agreement (FTA) with the United States, calling for the government to prepare measures to protect the local industry.

In a second round of public hearings hosted by the Ministry of Trade, Industry and Energy, market insiders and researchers addressed concerns on the possible impact from amendments to the five-year-old deal, called the KORUS FTA, which comes in response to growing pressure from Washington.

Kang Sung-cheon, deputy minister for trade, said the government will bear in mind the agricultural industry's concerns when sitting down at the negotiating table with their U.S. counterparts so as not to lower tariffs in key areas.

"Farmers and livestock breeders have expressed strong concerns over market openings in the wake of the KORUS FTA, calling for the government to reflect their concerns when talking with the U.S. counterpart," Kang said in a speech.

"The auto, steel, electronics and textile sectors are worried that the U.S. government could take an aggressive approach to reducing its trade deficits," the official said. He said locals called for establishing communication channels between industries and the government to handle the growing pressure in the manufacturing sector."

Ahead of the hearing held at the Convention and Exhibition Center (COEX) in southern Seoul, heavily guarded by security personnel and policemen, a group of farmers and livestock breeders held a separate briefing to oppose the amendment of the deal.

Han Min-soo, a senior official at the Korea association for agricultural industry, called on the government to take all possibilities into consideration in response to excessive U.S. demands.

"The government should sternly respond if the U.S. demands an additional market opening in the agricultural sector, even considering scrapping the KORUS FTA," Han said. "The agricultural industry is the representative sector that has suffered damages from the trade deal, so it should be excluded from the list of renegotiation." 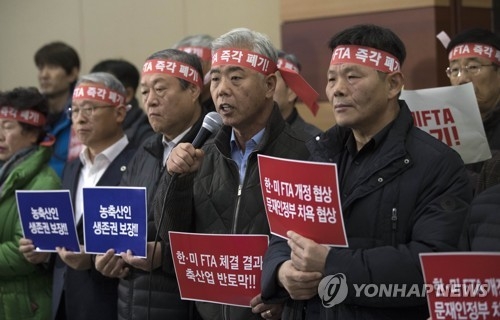 Kim Hong-kil, the chief of the national Korean beef association, said more cuts in the tariff on U.S. beef would result in the collapse of the national industry. He demanded the tightening requirements for safeguard actions on imported goods.

Safeguard measures restrict imports of a product temporarily if a domestic industry is seriously hurt or threatened by a surge in imports.

U.S. beef has gained a bigger presence in South Korea thanks to the free trade deal, achieving a market share of over 50 percent of the import market, according to data from the Korea International Trade Association (KITA).

The agriculture industry accounts for only 2.2 percent of South Korea's gross domestic product, but previous attempts to open the market to rice and beef have sparked fierce opposition from both farmers and the public.

"The trade deficit in the agriculture sector has worsened due to the KORUS FTA, which has dealt a blow to local farms," Han said. "People would not support an additional market opening in the agricultural sector."

In the earlier hearing on Nov. 10, the ministry unveiled an economic feasibility study that claimed a possible amendment to the KORUS FTA is not likely to have a visible impact on the South Korean economy because the two countries have already scrapped tariffs in many sectors.

The study didn't disclose detailed figures on each sector due to worries it would reveal South Korea's strategies before entering full-fledged renegotiations with the U.S.

The ministry said it will reflect the opinions of all sides when crafting its strategy and will notify parliament of its intention to renegotiate the deal. This process will wrap up the domestic procedures needed for opening talks.

The U.S. administration has to send a letter notifying Congress that it intends to launch FTA negotiations in 90 days. It must also hold public hearings and disclose its goal 30 days prior to official talks.