The town of Changnyeong in South Korea's southeastern province of South Gyeongsang, which has promoted a project to restore crested ibises to the wild, plans to release 20 crested ibises that were born in captivity into the town's Upo Wetland in the first half of next year. The wetland is South Korea's largest wetland and home to various rare species of birds, plants and fish native to the Korean Peninsula.

Crested ibises are to face many obstacles, such as agricultural chemicals and natural enemies when they adapt themselves to the wild. A highly pathogenic avian influenza, which has hit South Korea almost every year, could be the biggest concern to the people of the Changnyeong municipality who wish for the successful reintroduction of the birds to the wild. 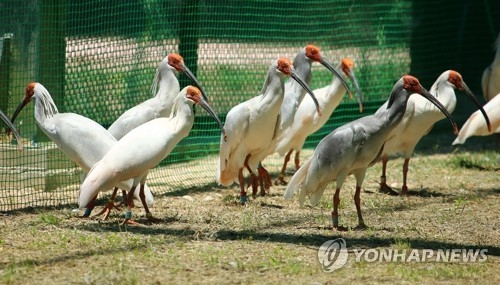 But the Upo Korean Crested Ibis Restoration Center, located near the wetland, takes a dim view on the possibility that crested ibises are infected with the virus.

"We have no major concern about it," said Lee Seong-bong, a senior official at the center who has taken charge of the project for the past 10 years.

Crested ibises being bred at the center have never been hit by bird flu cases discovered in South Korea.

A wild whooper swan, found dead near the wetland in December last year, was infected with a highly pathogenic avian influenza virus, but the crested ibises at the center overcame the bird flu case.

There have been no reports of avian influenza hitting the birds from Japan, which reintroduced 10 crested ibises bred in captivity into the wild in 2008, and China, which has given Japan and South Korea crested ibises for their revival efforts.

"Some of the migratory birds have been detected to have bird flu viruses, but they did not die en masse like cases at chicken or duck farms," Lee said. "Crested ibises are to be classified as migratory birds."

South Korea has been trying to reintroduce the species to the wild since 2008, when a pair of Chinese-born crested ibises -- a male called Yangzhou and a female named Longting -- were donated by China. The center now has 313 crested ibises in captive breeding.

Last year, the municipality displayed 20 crested ibises at the restoration center, making them the first to come face to face with the South Korean public in 37 years.

The bird, called "ttaogi" in Korean, was spotted for the last time in the Demilitarized Zone, which separates the two Koreas, in January 1979.

A delegation from the municipality has been to Sado Island, Japan's Niigata Prefecture, where crested ibises bred in captivity were successfully reintroduced, to learn more about how to make preparations for the revival effort.