SEOUL, Dec. 1 (Yonhap) -- Prosecution investigators raided the headquarters of SK Engineering & Construction Co. on Friday over suspicions the builder offered millions of dollars in kickbacks to a then-U.S. Forces Korea official to win a contract to build infrastructure for the sprawling American military base in Pyeongtaek.

Dozens of investigators seized computer hard disks, documents and other materials related to the Camp Humphreys project over allegations that the company gave 3.2 billion won (US$2.94 million) to the USFK official involved in the project.

That official was arrested in Hawaii and indicted for bribery charges last year.

In 2008, SK E&C won the 460 billion-won contract to landscape the site and build infrastructure, such as roads, water and sewage and power.

Prosecutors suspect that the company created slush funds through a subcontractor run by a former South Korean military officer. That officer, identified by his surname Lee, has recently been taken into custody and has told investigators that he passed SK's money to the USFK official.

After scrutinizing the seized evidence, prosecutors plan to call in SK officials for questioning. 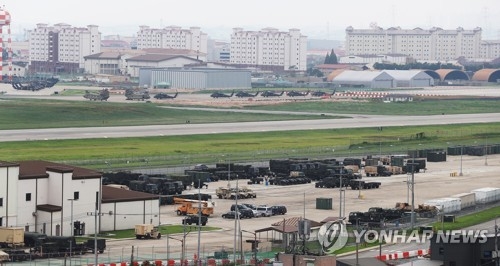