SEOUL, Dec. 1 (Yonhap) -- South Korea's unification ministry said Friday that it does not regard North Korea as crossing a "red line" with its latest test of a long-range missile due to doubts about its capability.

North Korea fired a new intercontinental ballistic missile (ICBM) on Wednesday, which it claims is capable of putting the whole mainland of the U.S. within its range. The North declared that it had completed its "state nuclear force."

Following the North's tests of two ICBMs in July, President Moon Jae-in said that North Korea would be crossing a red line if it creates a nuclear-tipped ICBM. Crossing that threshold could risk tougher actions from the U.S. including military action.

"The government does not think that North Korea's latest test demonstrated full capability for an ICBM, including the re-entry technology and a precision guidance system. Seoul does not view the North as crossing the red line," Lee Eugene, vice spokesperson at the ministry, told a press briefing.

Lee said that North Korea is likely to refrain from additional provocations for the time being if there is no sudden change in the current security situation.

"If there is no extreme change in the situation or other external factors, North Korea is highly likely to refrain from additional provocations for the time being. For the North, a seasonal factor could be factored in," she said.

The ministry said that it does not buy North Korea's claim over the completion of its nuclear weapons program. 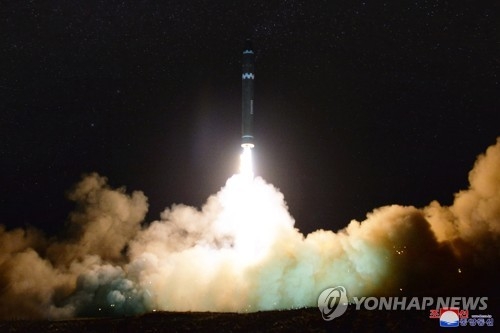