SEOUL, Dec. 1 (Yonhap) -- Kia Motors Corp. said Friday it will introduce its upgraded Sorento SUV at the 2017 L.A. Auto Show as it strives to boost sales in the world's most important automobile market.

The Korean carmaker plans to show off the face-lifted Sorento SUV at the U.S. motor show that kicks off Friday (local time) and lasts for 10 days. It aims to use the Sorento to expand its presence in the booming local SUV market, the company said in a statement.

Kia lags behind its rivals in the U.S. market, as it has not launched a new or upgraded SUV model to meet rising demand for recreational vehicles.

In addition to the upgraded Sorento, Kia also plans to display 26 other models that include the electric version of the Soul, the plug-in hybrid Niro, and the K5 plug-in hybrid model, the statement said. 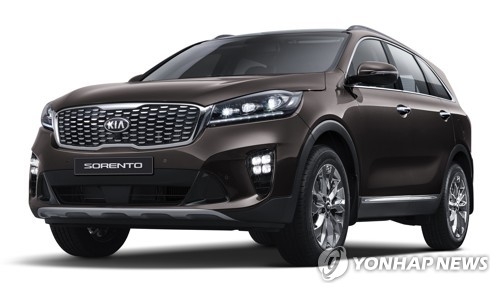