SEOUL, Dec. 1 (Yonhap) -- McDonald's Korea said Friday it has suspended a contract with the supplier of the burger patties that are suspected of having caused consumers to get ill due to undercooking.

"We've temporarily stopped receiving burger patties from Mckey Korea as of today," the South Korean unit of the U.S. fast food chain said in a statement. "We've begun the process to shift to a new supplier that has passed rigid quality and safety standards."

The statement comes one day after prosecutors sought arrest warrants for three Mckey Korea officials for providing undercooked burger patties in violation of the law on safety and hygiene control.

Prosecutors accused them of overlooking a hygiene test for patties that might be susceptible to a type of bacteria that causes a form of acute kidney failure known as hemolytic uremic syndrome (HUS).

Prosecutors raided McDonald's Korea's headquarters and three of its partner firms in October to seize evidence.

Joh Ju-yeon, the chief of McDonald's Korea, has expressed regret over the incident. 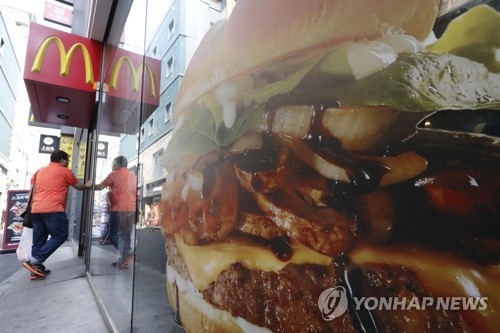