SEOUL, Dec. 1 (Yonhap) -- The National Assembly on Friday passed a set of motions to extend the deployment of South Korean troops in Lebanon, South Sudan, the United Arab Emirates (UAE) and off the coast of Somali by a year each.

Two of the motions call for extending the terms of the troops' mandates as part of the U.N. Interim Force in Lebanon (UNIFIL) and the U.N. Mission in South Sudan (UNMISS) by the end of next year.

The others allow the country's contingent, which has been deployed to help train UAE forces, and its anti-piracy Cheonghae Unit operating in the Gulf of Aden to continue their missions until the end of next year.

As of Nov. 30, last year, South Korea has 329 troops in Lebanon and 293 in South Sudan, according to Seoul's 2016 defense white paper. In addition to these troops, it has dispatched an additional four staffers to the UNIFIL and seven to the UNMISS.

The Cheonghae unit has 302 military personnel, while the UAE-based contingent consists of 146 troops.

More than 1,100 South Korean troops are operating on overseas missions in 13 countries. 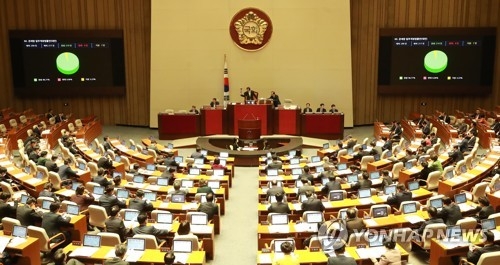