SEOUL, Dec. 1 (Yonhap) -- Prosecutors asked a former senior secretary to President Moon Jae-in to appear for questioning next week over bribery suspicions, officials said Friday, as they consider seeking another arrest warrant for him after an earlier request was rejected.

Jun is accused of forcing Lotte Homeshopping, a local home shopping channel, to donate 330 million won (US$303,700) in 2015 to the Korea e-Sports Association, of which he was the then-chief.

Prosecutors are also looking into suspicions that Jun forced another home shopping channel, GS Home Shopping, to make a donation. The company donated 150 million won to the Korea e-Sports Association in 2013.

Jun has denied the charges against him.

Last week, prosecutors sought a court warrant to formally arrest Jun, but the court rejected the request, saying that the charges against him are disputable and that he has a low risk of fleeing or destroying evidence.

After Monday's questioning, prosecutors plan to determine whether to seek a further arrest warrant for him. 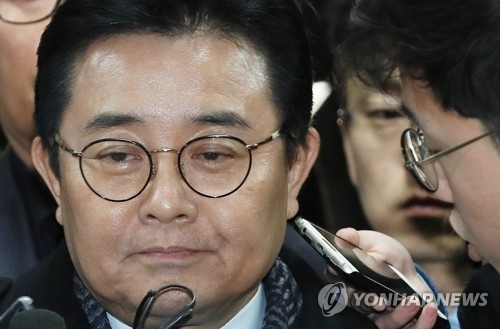 Prosecutors to question ex-senior secretary to Moon over bribery suspicions

Prosecutors to question ex-senior secretary to Moon over bribery suspicions