SEOUL, Dec. 2 (Yonhap) -- South Korea have been drawn into a tough group for the 2018 FIFA World Cup in Russia.

South Korea, the 2002 World Cup semifinalists, were paired with defending champions Germany, Mexico and Sweden in Group F at the draw ceremony for next year's top football tournament at State Kremlin Palace in Moscow on Friday (local time). 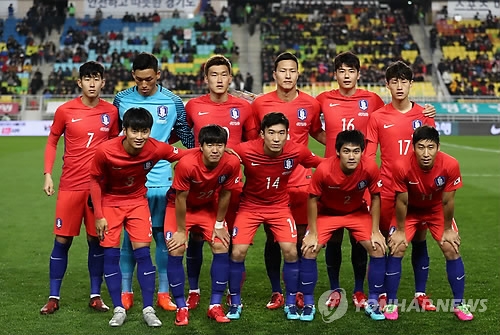 South Korea, led by head coach Shin Tae-yong, will open their World Cup campaign against Sweden at Nizhny Novgorod Stadium in Nizhny Novgorod on June 18. South Korea will then face Mexico at Rostov Arena in Rostov-on-Don on June 23 and take on Germany four days later at Kazan Arena in Kazan.

South Korea are the lowest-ranked team among the four nations at No. 59. Defending champions and four-time World Cup winners Germany are currently No. 1, while the North, Central American and Caribbean qualifying tournament winners Mexico sit at No. 16. Sweden, which beat Italy in the European World Cup qualifying playoffs, are next at No. 18.

The Taeguk Warriors, making their ninth consecutive World Cup appearance, have collected one win and two losses against Germany. Both of the defeats were at the World Cup as South Korea fell 3-2 in 1994 and lost 1-0 in 2002. South Korea's only win came in a friendly match at home in 2014 when they stunned Germany 3-1.

South Korea are winless against Sweden, trailing with two draws and two losses. Both sides last squared off in 2005 in Seoul, and played to a 2-2 draw. This will be the first time that the two teams will go head-to-head at the World Cup.

South Korea hold head-to-head record of four wins, two draws and six losses against Mexico. South Korea last met Mexico in a friendly match in 2014 and suffered a 4-0 loss. The two teams faced each other at the 1998 World Cup in France, where South Korea took a 3-1 defeat. 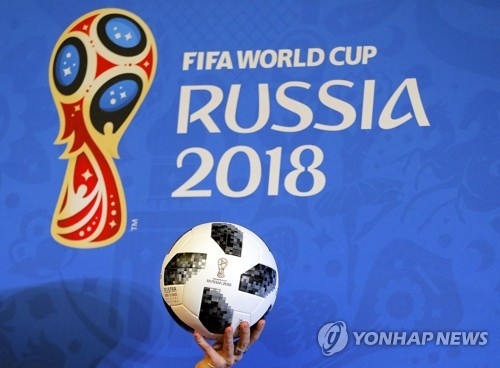 FIFA used its October rankings to allocate 32 World Cup participants to four pots. Teams were placed into pots in descending order of their rankings except for Russia who were automatically given a spot in Pot 1 as the tournament hosts. They were only 65th in October.

No team could be drawn with another team from the same pot. In addition, teams from the same confederation were not allowed to be drawn into the same group, with the exception of Union of European Football Associations (UEFA), which could have up to two of its members in the same group since there were 14 qualifiers from the continent.

The 32 teams in each pot were picked one by one and placed into groups from A to H. Former England striker Gary Linker and Russian sports journalist Maria Komandnaya served as draw conductors and they were assisted by eight legendary football stars including Diego Maradona, Cafu and Fabio Cannavaro.

South Korea, ranked No. 62 in October, were placed in Pot 4, third-lowest among World Cup participants, ahead only of Russia and Saudi Arabia.

Germany, also No. 1 in the October rankings, entered Group F first from Pot 1. Mexico then joined the group from Pot 2, followed by Sweden from Pot 3.

South Korea completed Group F after Cannavaro picked the ball with the country's name in it.

Hosts Russia, which were already given the top seed in Group A, were paired with two-time World Cup winners Uruguay, Egypt and Saudi Arabia.

Cristiano Ronaldo's Portugal were placed in Group B, and will face the 2010 World Cup title holders Spain, Iran, and Morocco.

Lionel Messi's Argentina went to Group D, where they will take on Croatia, Nigeria and World Cup debutants Iceland.

The draw for the 2018 World Cup had a simplified format compared to the previous draw. For the 2014 World Cup, hosts Brazil and top-seven ranked teams were placed in Pot 1 and rest of the participants were divided based on their continents. The old system, however, involved a "pre-draws" to move an European team from Pot 4 to Pot 2, and a temporary "Pot X" to keep the geographical balance, leading to complaints about complexity.

The 2018 World Cup in Russia will run from June 14 to July 15. A total of 64 matches will be played in 12 venues located in 11 cities. The final of the tournament will be staged at the Luzhniki Stadium in Moscow.

The 2018 World Cup is South Korea's 10th since they made the tournament debut in 1954. South Korea's best performance was in 2002 when they finished fourth while co-hosting the event with Japan. They also reached the round of 16 in 2010 in South Africa.