SEOUL, Dec. 2 (Yonhap) -- South Korean football players said Saturday they will be prepared to give their best effort at the upcoming FIFA World Cup despite their daunting group stage draw.

South Korea were drawn into Group F with defending champions Germany, Mexico and Sweden at the draw ceremony for the 2018 FIFA World Cup at State Kremlin Palace in Moscow on Friday (local time).

South Korea have the lowest FIFA ranking position among the four at No. 59. With four-time World Cup title holders Germany topping the November world rankings, the North, Central, and the North, Central American and Caribbean qualifying tournament winners Mexico sit at No. 16, followed by Sweden, which beat Italy in the European qualifying playoffs, at No. 18. 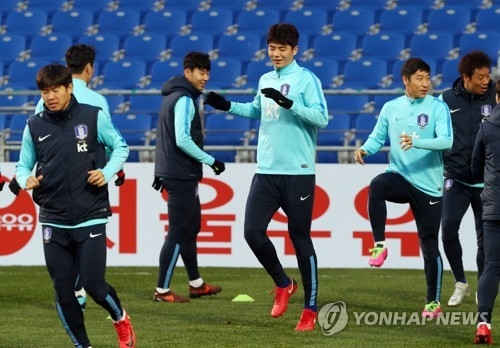 Although they are considered the weakest team in the group, South Korean players said they will not give up hope.

"Anything can happen at the World Cup," said South Korean team captain Ki Sung-yueng, who plays for the English Premier League (EPL) side Swansea City. "I think our first match (against Sweden) will be the most critical for us to reach the round of 16."

South Korea are scheduled to open their World Cup campaign against Sweden at Nizhny Novgorod Stadium in Nizhny Novgorod on June 18. South Korea will then face Mexico at Rostov Arena in Rostov-on-Don on June 23 and take on Germany four days later at Kazan Arena in Kazan.

South Korean attacking ace Son Heung-min, who is with Tottenham Hotspur, said what matters is their hard work ahead of the tournament. The 25-year-old will be having his second World Cup after suffering a painful group stage exit in Brazil four years ago.

"I know it's going to be difficult since every team is stronger than ours," he said. "But the ball is round. If we can prepare hard to improve, I think our tears at the 2014 World Cup can turn into smiles. This time, I hope all people can unite together so we won't experience a regrettable World Cup."

Koo Ja-cheol, midfielder for German Bundesliga side FC Augsburg, said the players should stick as one unit and work together to collect good results.

"There's not going to be an easy match at the World Cup because it's the most prestigious event that the players can play for their country," he said. "At the World Cup, you can't produce good results by yourself. We have to stick together as a team."

S. Korean footballers vow to give their best despite daunting World Cup draw

S. Korean footballers vow to give their best despite daunting World Cup draw