SEOUL, Dec. 2 (Yonhap) -- When the FIFA World Cup opens next year in Russia, South Korea head coach Shin Tae-yong will likely have flashbacks from the most recent Summer Olympics.

Shin will lead his underachieving team against Germany, Mexico and Sweden in Group F at next year's FIFA World Cup in Russia. Germany, world No. 1 since September, are the defending champions, Mexico (No. 16) and Sweden (No. 18) are both well ahead of the 59th-ranked South Korea. The draw took place in Moscow on Friday (local time).

"This isn't the worst draw we could've had, nor is this the best draw for us," he said. "Every team is stronger than our team, and I never was hoping for any luck. I thought we'd have to work as hard as we can no matter who we face."

Incidentally, Shin also coached against Germany and Mexico during the 2016 Rio de Janeiro Olympics. These three nations, along with Fiji, were in Group C, and South Korea and Germany advanced to the quarterfinals as the top two from the group. 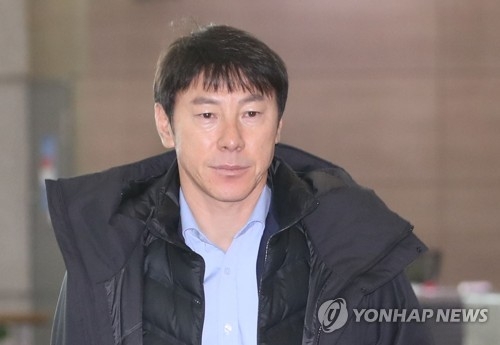 South Korea and Germany played to a 3-3 draw, and Shin's team defeated Mexico 1-0 in the group finale to reach the final eight.

Granted, the Olympic tournament is open to players under 23, and there will only be a few carryovers from those three Olympic squads for the World Cup.

Still, when South Korea ended in the same group with Germany and Mexico again, Shin said it was "my destiny."

The four pots were set up based on the countries' October FIFA rankings. With the three other nations already in Group F, South Korea and Japan were two last countries remaining with spots in Groups F and H open.

Group H had Poland, Senegal and Colombia. Shin admitted he'd have preferred the seventh-ranked Poland to Germany, but said he would accept the draw and move on.

Sweden, which ousted Italy in the European qualifying playoffs, are the closest to South Korea in the rankings, but the Taeguk Warriors have never beaten Sweden, with two draws and two losses all-time.

"They're stronger and taller, and on paper, they're a superior team," Shin said. "But if we can improve our cohesion and peak at the right time, we may have a fighting chance."

Shin is scheduled to tour the venues for South Korea's three group matches -- Rostov Arena in Rostov-on-Don and Kazan Arena in Kazan being the other two -- before returning home. The rest of the national team are preparing for the East Asian Football Confederation (EAFF) E-1 Championship against Japan, China and North Korea starting next week.