SEOUL, Dec. 2 (Yonhap) -- North Korea held a rally and fireworks display to celebrate what it claims to be the completion of its nuclear arsenal with its latest firing of a new intercontinental ballistic missile (ICBM), Pyongyang's state media said Saturday.

Military servicemen and citizens gathered in Pyongyang on Friday to mark the country's completion of the "state nuclear force" with the Wednesday test of the Hwasong-15 missile, according to the Korean Central News Agency.

During celebratory speeches, key party and military officials said that the missile test put the strategic position of North Korea on the highest level.

"Nobody can infringe on our rights to sovereignty, survival and development as we have completed the state nuclear force," Pak Kwang-ho, a vice chairman of the central committee of the Workers' Party of Korea, was quoted as saying by the party's main newspaper Rodong Sinmun.

The North launched its most advanced ICBM, which it claims is capable of striking the whole mainland of the U.S.

Seoul's defense ministry said Friday that the North's new missile could reach Washington, but more verification is needed on its missile technology including re-entry and terminal guidance system and warhead conditions.

The celebration is seen as intended to bolster internal solidarity as the international community is expected to toughen its sanctions on the North. 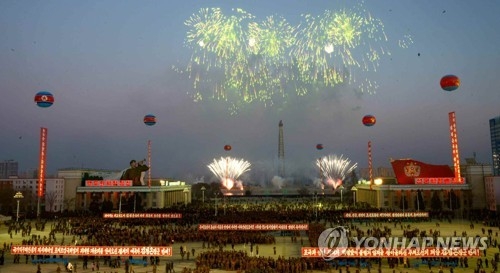