SEOUL, Dec. 2 (Yonhap) -- Rival parties on Saturday engaged in last-minute negotiations over the government's spending plan for next year with the legal deadline for the budget approval approaching.

The floor leaders of the ruling Democratic Party, main opposition Liberty Korea Party and People's Party sought a breakthrough over the budget plan worth 429 trillion won (US$395 billion) under a deal to finish their negotiations by Saturday noon.

The National Assembly is set to hold a plenary session in the afternoon to possibly vote on the budget bill, which is vital to bankroll President Moon Jae-in's priority policies to create jobs, enhance public welfare and prop up economic growth.

Last night, the rival parties scrambled to craft a compromise over several sticking points such as proposed outlays for creating public service jobs, but their talks ended with no breakthrough.

Through days of negotiations, some progress has been made on disputed proposals such as those involving the inter-Korean cooperation funds, health insurance and basic pension schemes.

The passage of the budget plan requires the cooperation of the People's Party, which has 40 lawmakers, as the ruling Democratic Party has only 121 parliamentary seats, far short of a majority in the 299-member unicameral legislature. 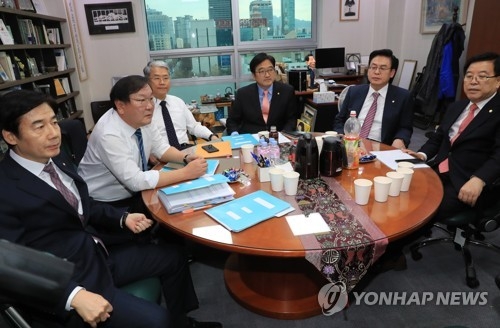