SEOUL, Dec. 2 (Yonhap) -- Rival parties failed Saturday to reconcile their differences over the government's spending plan for next year, dashing hopes for meeting the legal deadline for budget approval.

With the Saturday deadline approaching, their top negotiators sought a breakthrough in last-minute negotiations over the 429 trillion won (US$395 billion) bill, but they failed to compromise over a set of sticking points, such as proposed overlays for job creation.

They decided to hold a parliamentary plenary session on Monday to possibly vote on the bill vital for President Moon Jae-in's priority policies to create jobs, improve public welfare and spur growth.

"I feel sorry to citizens for being unable to meet the deadline though we have tried our utmost not to miss it," Woo Won-shik, the floor leader of the ruling Democratic Party, told reporters.

Chung Woo-taik, the whip of the main opposition Liberty Korea Party (LKP), said the negotiators need a "cooling-off period" as all dug in their heels.

Despite the failed negotiations, the National Assembly held a plenary session at night to pass a series of uncontentious bills.

The budget bill was already sent to a parliamentary plenary session at noon Saturday under a cross-party agreement, a step to make it ready for a floor vote.

From the morning on, top negotiators of the ruling party, the LKP and the People's Party struggled to break the political impasse, but they refused to make any significant concessions. 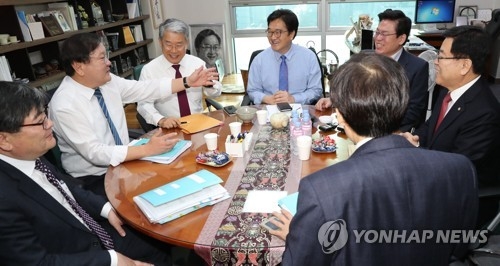 Major bones of contention are a proposal to use 534.9 billion won to support Moon's push to create 174,000 new public service jobs by 2022 and the 3 trillion won "job stability" plan to bankroll next year's minimum wage increase.

During the negotiations, the three parties wrangled over how much they would scale back the initial plan to increase some 12,000 public-service jobs next year.

Regarding the job stability plan, opposition parties demanded it be applied for only one year. The government and ruling party balked at it.

Another sticking point was the ruling bloc's push to increase tax rates for top-earning individuals and businesses. Opposition parties demanded that the proposed income tax rise be introduced in 2019 rather than next year.

The ruling party needs the opposition bloc's support for the budget passage as it has only 121 parliamentary seats, far short of a majority in the 299-member legislature.

If the parties' negotiations go beyond the Jan. 1 start of the fiscal year the government would have to devise a provisional budget that can be used only for mandatory expenditures as stipulated by law.