BERLIN, Dec. 1 (Yonhap) -- One of the Korean victims of sexual slavery by the Japanese military during World War II has made a donation to an international human rights group committed to protecting refugee women, officials involved in the event said.

Gil Won-ok, the 90-year-old Korean victim, donated to Women in Exile & Friends, a German-based nonprofit organization working to promote refugee-focused political demands from a feminist perspective, during her visit to Berlin on Friday.

Gil also delivered money from the Butterfly Fund to the organization's activists in the German capital. 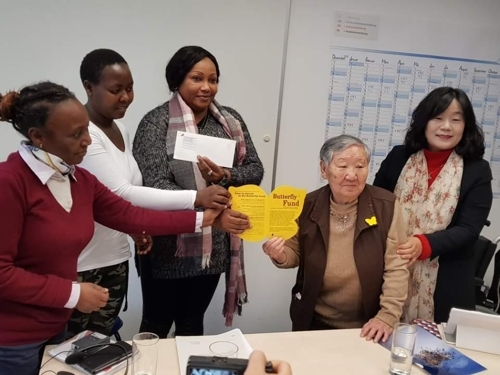 The Butterfly Fund was started in 2012 by Korean sexual slavery victims, euphemistically called "comfort women," and the Korean Council for the Women Drafted into Military Sexual Slavery by Japan, to help women across the world affected by wartime sexual violence.

Gil, who was in Berlin on the occasion of the 10th anniversary of a European parliament resolution on the settlement of comfort women issues, said at the donation event that she wishes Women in Exile & Friends would make greater efforts to support victims of sexual violence worldwide.

"At age 13, I began cherishing a dream of becoming a singer. I finally realized the dream just before turning 90. I wish all victims would not abandon their dreams," said Gil, who released her own album of about 20 songs this summer.

At the request of the participants, she sang one of the songs during the donation event.

The Women in Exile & Friends activists said they will spend the donations from Gil and the Butterfly Fund on the psychological treatment for refugees staying in facilities across Europe.
(END)