SEOUL, Dec. 2 (Yonhap) -- The amount of cash donations made to public organizations to help victims of the earthquake in the Pohang region has topped 30 billion won (US$27.6 million), a government agency said Saturday.

The National Disaster and Safety Control Center said 30.04 billion won had been donated to the Korea Disaster Relief Association and the Community Chest of Korea as of 3 p.m. Friday to help relieve the victims of a magnitude 5.4 earthquake that hit Pohang and neighboring areas in South Korea's southeast on Nov. 15. 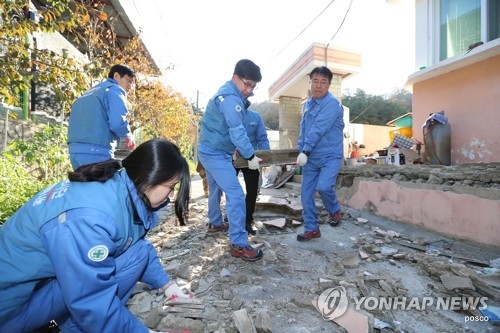 The Korea Disaster Relief Association collected 23.14 billion won, with the rest donated to the Community Chest of Korea, the state-run center added.

The center said the number of victims injured by the earthquake now stands at 92, with six still receiving treatment in a hospital.

The number of people still evacuated from their homes has fallen to 898 after peaking at about 1,800, it noted.
(END)