SEOUL, Dec. 2 (Yonhap) -- Six U.S. F-22 Raptor stealth fighter jets arrived in South Korea on Saturday for joint air drills between Seoul and Washington slated for next week in a show of force against North Korea.

The fighter planes will join the allies' annual airborne exercise named Vigilant Ace to be held from Dec. 4-8, according to the South Korean Air Force.

They are capable of accurately hitting key targets without being detected by an enemy's radar. It will be the first time for six F-22 stealth fighter planes to fly over South Korea at one time. 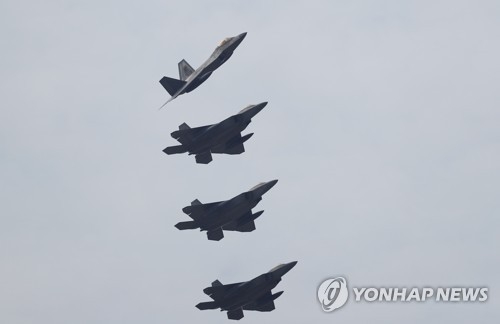 The U.S. also plans to send F-35A and F-35B stealth jets, F-16C fighter planes and others including an unspecified number of B-1B bombers.

The South Korean Air Force will dispatch F-15K, KF-16 and F-5 fighter jets and other planes for the exercises with about 230 aircraft at eight U.S. and South Korean military installations being mobilized.

The allies plan to stage simulated attacks on mock North Korean nuclear and missile targets and transporter erector launchers that move the North's missiles, it said.

The maneuvers come as North Korea on Wednesday fired a new intercontinental ballistic missile (ICBM) which Seoul says is capable of flying some 13,000 kilometers, declaring that it has completed the "state nuclear force."

Seoul and Washington agreed in October to enhance the rotational deployments of U.S. strategic assets to curb North Korea's nuclear and missile threats.

North Korea has long denounced the allies' military drills as a war rehearsal for an invasion and used them as an excuse for provocations. Seoul and Washington have said that the exercises are defensive in nature.