SEOUL, Dec. 2 (Yonhap) -- A Korean War memorial will be set up in Melbourne, Australia, next year to honor the service and sacrifices of about 17,000 Australian soldiers who participated in the 1950-53 war, the Melbourne Korean War Memorial Committee said Saturday.

The Melbourne Korean War Memorial, when completed, will be Australia's fourth such memorial following ones in Canberra, Sydney and Gold Coast, committee officials said.

They said the Melbourne memorial will be located in Quarry Park in the City of Maribyrnong.

The memorial designed by Swinburne University of Technology will be shaped like a bridge where the two countries' national flowers -- the Rose of Sharon and Golden Wattle -- will be inscribed. 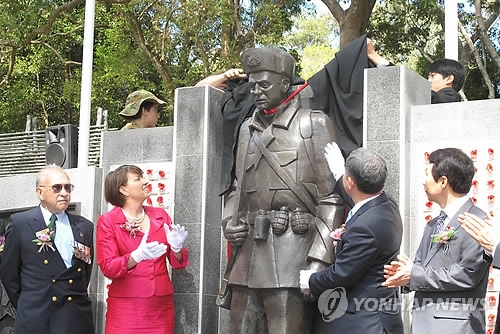 Notably, stones from Gapyeong, east of Seoul, where Australian soldiers fought fiercely during the Korean War, will be used to build the Melbourne memorial, said the committee officials.

A groundbreaking ceremony for the memorial was held in Quarry Park on Nov. 27, with about 30 veterans and their families attending.

"The new memorial in Melbourne is expected to serve as a bridge between South Korea and Australia by honoring Australian war veterans and teaching the young generation about history," said Jo Hong-ju, consul general of the Korean Consulate General to Melbourne.
(END)

Korean War memorial to be set up in Melbourne

Korean War memorial to be set up in Melbourne