According to the research conducted by industry tracker Brand Stock on the country's major brands, Samsung Galaxy earned the highest evaluation on the list, maintaining its No. 1 position since 2011.

Samsung Galaxy's performance is significant as the suspended production of the Galaxy Note 7 smartphone in 2016 due to faulty batteries was anticipated to deal a harsh blow to the brand.

Shin Ramyun, one of the country's most consumed instant noodle, was ranked in eighth place. U.S. tech giant Google Inc. placed 10th in terms of its brand value in South Korea.

Kakao Talk, the most widely used mobile messenger app in South Korea, along with KB Kookmin Bank and Incheon International Airport, all made the top 10 list.

Other brands relying heavily on the Chinese market lost ground due to the diplomatic tension between Seoul and Beijing.

China earlier rolled out economic retaliations against local firms as South Korea deployed a U.S. missile defense system on its soil, which Beijing claims to be a potential threat. The move was lifted partially recently.

Hyundai Motor Co., which also has been suffering from falling sales in China, saw its Grandeur sedan's brand value plunge 15 steps to 62nd place. The brand value of the Sonata sedan was also ranked at just 89th place. 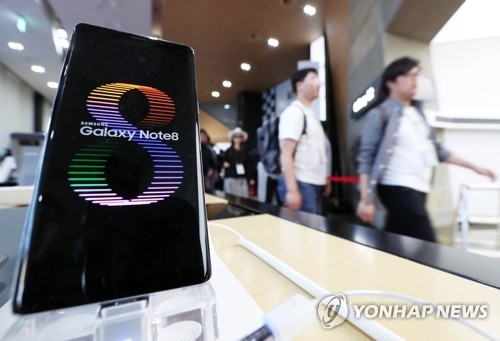