According to the Bank of Korea, the country's composite consumer sentiment index (CCSI) rose to 112.3 in November, the highest reading since December of 2010, when numbers hit 112.7.

A reading above 100 means optimists outnumber pessimists, while a reading below the benchmark means the opposite.

The index rose from February through July on expectations of change and political stability following the impeachment of the country's former president, but numbers started to backtrack from August and September with the rise of the North Korea risk.

The CCSI rebounded in October, followed by further gains last month, as Seoul and Beijing agreed to repair relations that have been affected by the Terminal High Altitude Area Defense (THAAD) deployment.

China maintains that the advanced U.S. missile defense systems threatens its national interest, while Seoul has insisted it is needed to counter North Korea's growing nuclear and missile threat.

“The rise in consumer sentiment reflects the easing of perceived threats from North Korea and the lessening of the diplomatic row with China," a central bank official said.

Besides improved sentiment, local retailers reported noticeable gains in sales coming into the fourth quarter with big names, such as the Lotte and Hyundai department stores, posting over 4 percent gains in November after generally lackluster performances for the whole of this year.

A Lotte source said this year witnessed seven straight months of a decline in sales, yet starting last month with the onset of colder weather, there has been a rise in consumer demand.

On the other hand, despite the favorable numbers, many here are cautious about the sustainability of consumption that is critical for economic growth.

"Consumption is mainly affected by employment and real income," said Ju Won, a senior researcher at the Hyundai Research Institute.

He pointed out that South Korea is struggling with high unemployment among young people, while its real income has actually posted negative growth recently.

"There are even research papers that claim that sentiment has nothing to do with actual consumption so there is a need to be guarded about putting too much importance on CCSI numbers," the economist said.

Ju then said that while computer chips have contributed to strong exports, there is little sign this is leading to a rise in domestic consumption.

Others pointed out that there has been a decoupling between exports and the domestic economy for some time, and little possibility that this will change now.

Besides overall concern in the job market front, the recent decision to raise the country's key rate to 1.5 percent, which could reduce the disposable income of many households and raise basic wages leading to businesses holding off on employing people, could have a negative impact on the economy. 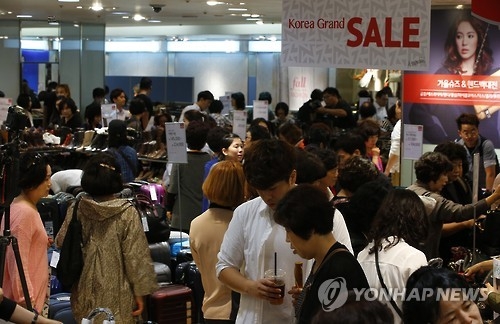