He stressed that there's no fortress that the North needs to occupy nor impasse it needs to overcome during the visit to the Amnokgang Tire Factory in Manpo, Jagang Province.

Kim's "field guidance" came days after the North said it has completed its "nuclear force" with the development of the Hwasong-15 ICBM that can reach anywhere in the United States with a super-sized nuclear warhead.

The North revealed an 18-wheel transport erector launcher (TEL) truck that apparently used tires made in the factory.

"He gave the task of manufacturing without fail the large-size tire for the 9-axis self-propelled launching vehicle of our own style to the factory in September," the Korean Central News Agency (KCNA) said in an English-language report. 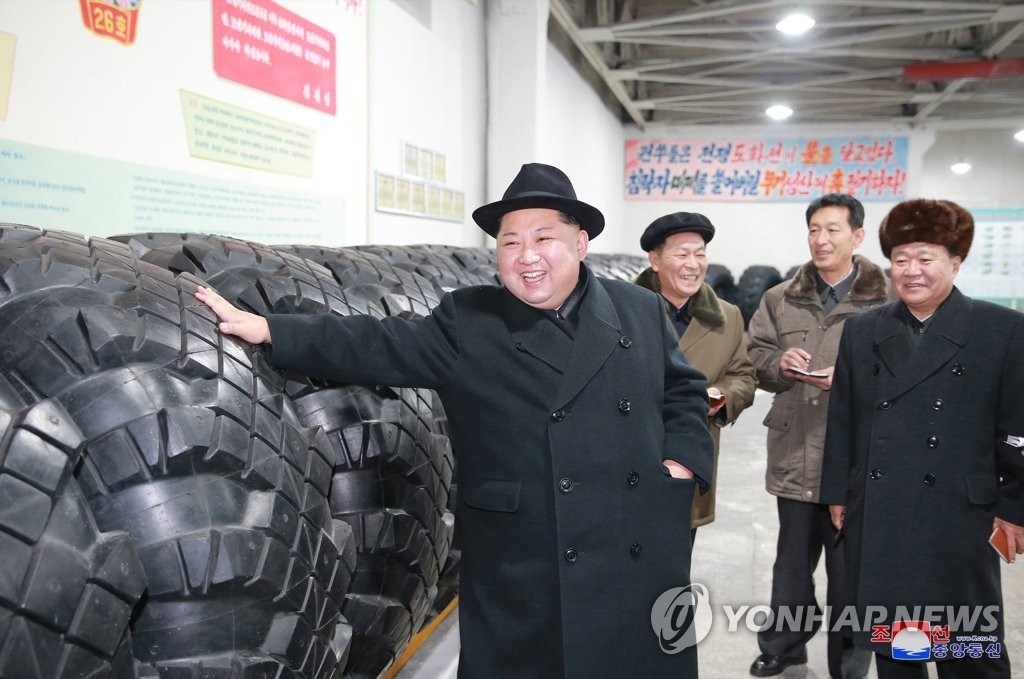 Looking around the factory, he was quoted as saying that he was greatly impressed to see the "fighting spirit and working manner of the officials and working class who had established the new production process of large-size tire with domestic products, not depending upon imported equipment, in a revolutionary way and in a short time," the KCNA reported.

He lauded the workers for manufacturing the "new-type large-size tires, far superior to imports in their physical and mechanical properties."

Kim emphasized the importance of the tire production for the communist nation's overall economy and national defense.

"Therefore, the factory must be upgraded to be state-of-the-art one in line with the requirements of the era of the knowledge-based economy," Kim added.

As usual, the KCNA provided no exact date for Kim's activity. The North's state-controlled media often carry reports of his public events a day later, apparently in consideration of security concerns.

NK leader: No barrier for our weapons program

NK leader: No barrier for our weapons program