SEOUL, Dec. 3 (Yonhap) -- Contractors forced to temporarily halt work on the Shin-Kori 5 and 6 reactors have asked for 100.37 billion won (US$92.3 million) in compensation from the state-run nuclear power company, an opposition lawmaker said Sunday.

According to Rep. Kim Jung-hoon of the main opposition Liberty Korea Party, related companies are asking the Korea Hydro & Nuclear Power Co. (KHNP) to cover their losses brought on by the three-month suspension.

The total drawn up by Samsung C&T Corp., Doosan Heavy Industry and Construction Co., Hanwha E&C and other companies is 34.17 billion won more than the damage estimate drawn up by the KHNP.

The total being requested covers direct compensation worth 66.2 billion won and 33.8 billion won in extra expenses incurred by the work stoppage. The government ordered the suspension of the construction of the reactors in the southeastern city of Ulsan to check public opinion.

The incumbent Moon Jae-in administration announced it will move the country away from its reliance on nuclear energy and fossil fuel toward clean and renewable sources, such as solar and wind power.

Observers said that with companies demanding more than what the KHNP initially said it will pay, all that remains is what understanding will be reached to resolve the matter.

The public company has already asked for legal advice from a local law firm to check if the compensation demands meet requirements.

"We have received all requests as of Nov. 29 with the total to be paid expected to be determined within the month," a KHNP official said.

Related to the situation, Rep. Kim said that there is a good chance the case will be taken to court.

"It is important that the matter does not end in a drawn-out legal battle that can hold up construction of the two incomplete reactors," the lawmaker said. 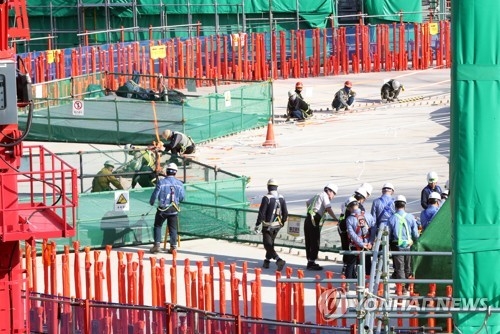