SEOUL, Dec. 3 (Yonhap) -- Hyundai Motor Co., South Korea's No. 1 carmaker, said Sunday that it will sell a refreshed model of its Maxcruz crossover with improved options in its home market.

The 2018 model year SUV that hits showrooms across the country Monday will come with a host of conveniences, such as Apple CarPlay and the artificial intelligence solution Kakao I with voice recognition features.

The company also increased the free Blue Link connected car service to five years from the current two and generally improved its smart navigation and audio systems on the three-row SUV.

For cars with the high-end prestige trim or higher, the Maxcruz will come with an around-view monitor that can aid moving the vehicles in tight spots.

The carmaker said that prices of the crossover, called the Santa Fe in the United States, has been brought down slightly for both the diesel and gasoline powertrains mated with an eight-speed automatic gearbox. 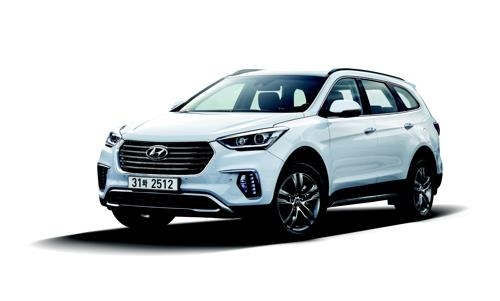