CHUNCHEON, South Korea, Dec. 3 (Yonhap) -- Facilities for the upcoming PyeongChang Winter Olympics should be managed as a national heritage after their closing, and thus administrative and financial support is required for their post-event management at the state level, a researcher at a local think tank said Sunday.

After the Olympics, the facilities should remain as a sports heritage, and be used as a foundation to promote winter sports in the nation and build a healthy society," Kim Tae-dong of the Research Institute for Gangwon claimed in a paper titled "The Use of Winter Olympic Facilities as Legacy."

"It's common for most Olympic facilities to be operated at the national level as shown in other cases at home and abroad," Kim said, while reminding that the International Olympic Committee designates Olympic facilities as one of the five Olympic heritages.

The Korea Sports Promotion Foundation was set up after the 1988 Seoul Summer Olympics with the event's profits and state funds used to manage its facilities.

The 1980 Lake Placid, 1988 Calgary, 2002 Salt Lake and 2010 Vancouver Winter Olympiads have also managed their facilities as legacies with the federal government's financial support and profits from the events, he claimed.

"In particular, the facilities for speed skating, hockey, skiing and ski jumping of the PyeongChang Olympics should be administered later by the state as they all are very low in profitability," he said, insisting a special law be enacted to provide financial assistance to their post-event management. 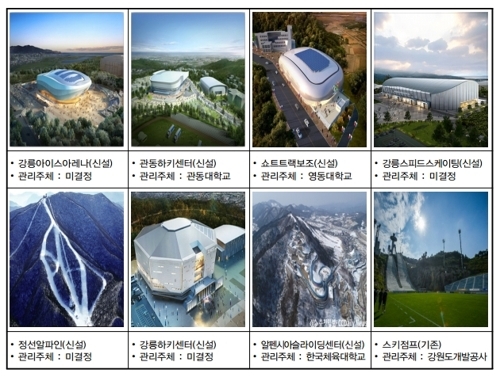 Post-Olympic facilities should be managed at state level: researcher

Post-Olympic facilities should be managed at state level: researcher