The allies plan to kick off the five-day Vigilant ACE practice Monday, which would demonstrate their combined air power against North Korea.

It comes days after the North fired a new intercontinental ballistic missile (ICBM) and elevated tensions in the region.

The exercise will involve more than 230 warplanes from both sides, including those stationed abroad. 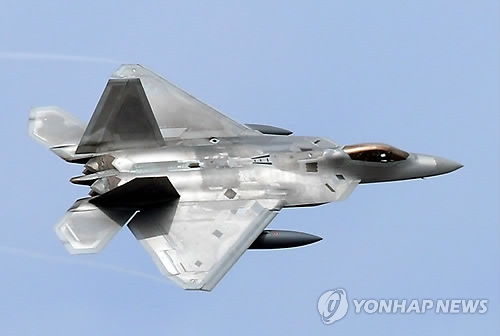 They include six F-22 Raptors and six F-35As. It's quite unusual for the U.S. to deploy such advanced jets in the country.

Also to be mobilized are six EA-18G Growler electronic warfare jets and dozens of F-15C and F-16 fighter jets.

Some Marine F-35Bs, stationed in Japan, are also expected to take part in the training exercise to be joined by South Korea's F-15K, KF-16 and F-5 fighters, as well as other planes.

The Vigilant Ace drill is the allies' biannual training event.