INCHEON, Dec. 3 (Yonhap) -- South Korea football coach Shin Tae-yong said Sunday that his side has a chance to reach the round of 16 at the 2018 FIFA World Cup despite the tough group draw.

Shin returned home from Moscow after attending the draw ceremony for the 2018 World Cup in Russia. South Korea is part of Group F that is made up of the defending champions Germany; the North, Central and Caribbean qualifying winners Mexico; and Sweden, which beat Italy in the European qualifying playoffs to reach football's showpiece event.

Shin reiterated that it isn't the worst nor the best draw for South Korea, which will compete in their 10th World Cup. The 48-year-old admitted that it will be difficult to beat the four-time World Cup winners and current No. 1 Germany but said the men's national team have a chance against Mexico and Sweden.

"It's true that Germany are the toughest opponents as they are No. 1 in the rankings, but for Mexico and Sweden, I think we do have a chance," Shin said to reporters at Incheon International Airport. "I know our chances aren't big, but if we prepare well, I think we can make it (to the round of 16)." 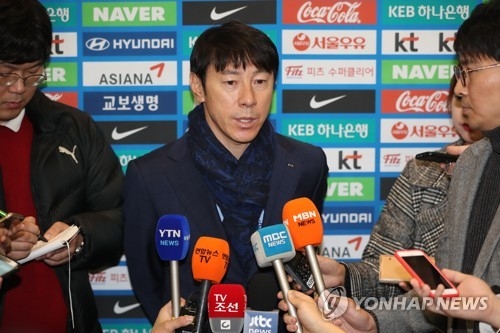 The South Korean side remains winless against Sweden, with two draws and two losses. Both sides last squared off in 2005 in Seoul and played to a 2-2 draw. This will be the first time that the two teams will go head-to-head at the World Cup.

South Korea hold a head-to-head record of four wins, two draws and six losses against Mexico. The Taeguk Warriors last met Mexico in a friendly match in 2014 and suffered a 4-0 loss. The two teams faced each other at the 1998 World Cup in France, where South Korea took a 3-1 defeat.

The South Korean side collected one win and two losses against Germany. Both of the defeats were at the World Cup as South Korea fell 3-2 in 1994 and lost 1-0 in 2002.

At the World Cup draw, South Korea were in Pot 4 based on their October FIFA rankings. Shin said he wanted to be in Group A that had hosts Russia, Uruguay and Egypt before teams from Pot 4 were drawn. Saudi Arabia later completed that group.

"After Group A was completed, I just thought we should avoid going to Group B that had Portugal and Spain, and Group G that featured England and Belgium," he said. "Other than those groups, I thought the rest of the groups are the same."

Shin, who previously managed South Korea at the Olympics and at the FIFA U-20 World Cup, said the first match against Sweden is critical.

South Korea will open their World Cup campaign against Sweden at Nizhny Novgorod Stadium in Nizhny Novgorod on June 18. They will then face Mexico at Rostov Arena in Rostov-on-Don on June 23 and take on Germany four days later at Kazan Arena in Kazan.

"What I learned from the Olympics and the U-20 World Cup is that the first match is very important," he said. "If we can get good results from the tournament opener, I think we have a possibility to reach the round of 16."

Shin, who took over the team in July, said the national team's base camp for the upcoming World Cup will be announced soon. He previously inspected candidate cities for a training base earlier.

Shin was originally scheduled to return home Wednesday but decided to make an early comeback to prepare for the East Asian Football Confederation (EAFF) E-1 Championship against Japan, China and North Korea starting this week. After the regional tournament, Shin said his team will push harder for the World Cup preparations.

"I've already thought about our plans for overseas training in January and friendly matches in March," he said. "I'll request the Korea Football Association to arrange friendly matches with teams that are similar to our group stage opponents."