Ulsan claimed the prestigious domestic cup competition title after beating Busan IPark FC with a 2-1 aggregate score over two legs. Ulsan played to a scoreless draw with Busan in the second leg of the FA Cup final at home, but the result was enough for their victory after they took the first leg with a 2-1 win on the road Wednesday.

Ulsan, which finished fourth in the top-tier K League Classic, will directly advance to the group stage of the 2018 Asian Football Confederation (AFC) Champions League as the South Korean FA Cup title holders.

This was Ulsan's first ever FA Cup title since they were founded in 1983. Their previous best finish was in 1998, when they were the runners-up of the tournament.

Busan, which play in the second division K League Challenge, were looking for their first FA Cup title since 2004.

It was the visitors who had early control at Munsu Football Stadium in Ulsan. Busan forward Park Jun-tae had a promising chance in the ninth minute, but his left-footed attempt was tipped away by Ulsan goalkeeper Kim Yong-dae.

Ulsan striker Lee Jong-ho had his opportunity to score when he took the ball in the box in the 22nd, only to see his powerful shot go straight to Busan goalkeeper Kim Hyung-geun.

Busan nearly stunned Ulsan at the end of the first with Lee Jae-kwon hitting the post from close range following Park's cross.

In the second half, both clubs' foreign players started to step up. Ulsan's Croatian attacker Mislav Orsic tested Kim Hyung-geun with a right-footed attempt in the 53rd, while Busan's Brazilian midfielder Romulo's long-range effort in the 60th went over the net.

Desperate for goals, Busan made their last substitution in the 82nd, sending forward Choe Seung-in for midfielder Jung Seok-hwa. Busan were given three minutes of stoppage time and had a free kick chance in the 93rd but failed to unlock Ulsan's solid defense until the end. 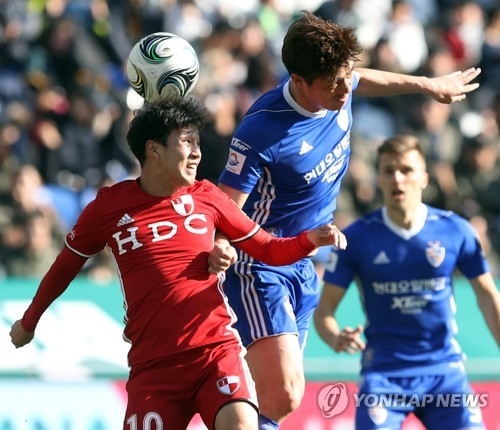 Ulsan head coach Kim Do-hoon thanked his players for executing the game plan, though it was a pity that they couldn't score in front of home fans. Ulsan will also receive 300 million won (US$276,000) for their win.

"The players knew what they had to do," Kim said after the match. "After we defended the opponents' attack in the first half, I told the players that we can turn the tide in the second half, and they followed the game plan very well."

"It's really a thankful day for me," he said. "With this title, I will keep working hard. I also think this victory is the beginning for Ulsan."