SEOUL, Dec. 3 (Yonhap) -- South Korea has one of the lowest birthrates of any country in the world this year, data released by the U.S. Central Intelligence Agency (CIA) and picked up in Seoul showed Sunday.

The latest World Factbook based on estimates for 2017 showed that the country's total fertility rate (TFR) or the average number of children that a woman bears over her lifetime stood at just 1.26. This placed South Korea 219th among 224 nations checked.

Of these, only Taiwan has a sizable population, while the others all have fewer than 10 million people, the CIA report said.

The latest findings also placed Asia's fourth-largest economy at the bottom in terms of birthrate among the 35 members of the Organization for Economic Cooperation and Development.

The report showed that South Korea was plagued by a drop in the number of women able to bear children and couples having their first baby relatively late in their lives.

The Factbook is substantiated by data released by Statistics Korea that said 278,100 babies were born in the country in the January-September period, making it likely that the total will fall below 400,000 for the first time since the country started checking such numbers. 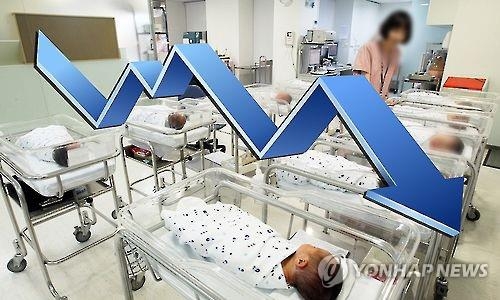 The comprehensive data, meanwhile, said Niger had the highest fertility rate at 6.49, with many African countries making the top-10 list.

South Korea's life expectancy at birth reached 82.5 years, placing it 11th highest in the world, with Monaco coming in at the top at 89.4 years. Japan, Singapore and Macao made the top four.

The United States stood at 43rd place, with its life expectancy standing at 80, while numbers for China and North Korea reached 75.7 years and 70.7 years, respectively.

The country, meanwhile. was the sixth-largest exporter after China, the European Union, the U.S., Germany and Japan.