Lee finished second to Kodaira in the women's 500 meters in the third leg of the International Skating Union (ISU) World Cup Speed Skating in Calgary, Canada, on Sunday (local time). With a time of 36.86 seconds, Lee finished 0.33 second behind Kodaira, who broke her personal best with 36.53 seconds to win her fifth consecutive World Cup 500m race this season.

Lee is the two-time reigning Olympic champion in the 500m and also the world record holder with 36.36 seconds, but the 28-year-old has been overtaken by Kodaira over the past two seasons. The 31-year-old Japanese was undefeated in eight World Cup races in the 2016-2017 season and also captured both the world single distance championship and the sprint championship in the 500m. 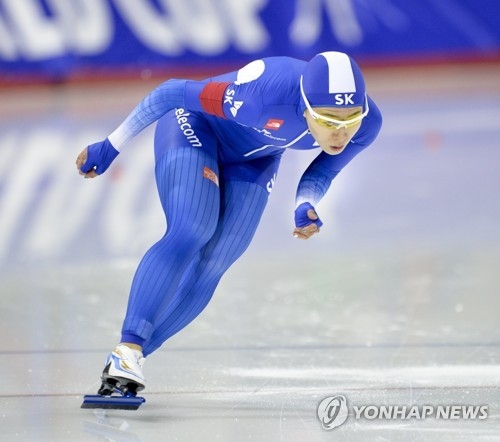 The one saving grace from the two's latest showdown was that Lee cracked 37 seconds for the first time this season. She struggled at the previous World Cup stop in Stavanger, Norway, last month, finishing third and seventh in two 500m races.

The first four out of six World Cup competitions this season will serve as qualifying events for the 2018 PyeongChang Winter Olympics, as they will decide quota places for each country.

A total of 180 speed skaters -- 100 men and 80 women -- will compete in PyeongChang, and the quota places will be allocated based on the points rankings and time rankings at the World Cup races.

For countries that secure a quota place in all events, the overall quota per country will be a maximum 10 each for men and women.