SEOUL, Dec. 4 (Yonhap) -- Samsung Electronics Co. said Monday it plans to showcase a film on its QuickDrive washers under cooperation with a popular music composer, highlighting how its products can save users time compared with rivals.

The company said the 66-minute film, "Washing Machine" will be showcased in London on Tuesday, with popular Michael Nyman joining the project. The movie will be available on YouTube starting Wednesday.

"The film chronicles the full cycle, moment by moment, of Samsung's QuickDrive washing machines, in this big screen addition to the canon of slow cinema treats," the company said.

"The production team captured the action with a single long shot trained on the machine to bring the full glory of the wash, rinse and spin to the screen," it added.

Samsung said the project aims to show how tedious the washing process can be, and at the same time, emphasize that QuickDrive washers can cut such time down.

The tech giant claims that the QuickDrive washers reduce washing time by up to 50 percent "without compromising the cleaning performance."

An official from the company said the movie is fresh and humorous, and aimed at social media platforms. He said the film will promote the washers in the European market. 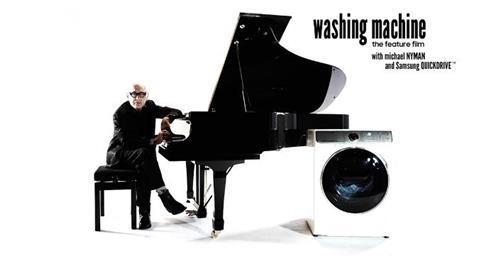