The portion of new bank loans with an annual interest rate of 10 percent or higher came to 0.5 percent of their total lending in September, a level not seen since February 2015, according to the data from the Bank of Korea (BOK).

The percentage maintained the same level in October, compared with a yearly low of 0.2 percent recorded in June.

Last week, the BOK upped the base rate by a quarter percentage point to 1.5 percent amid clear signs of an economic recovery, snapping the 16-month run of its standpat stance. 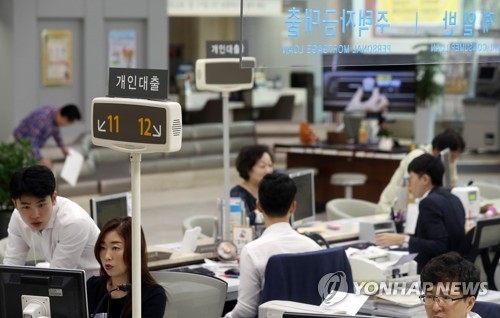 Some market watchers said a set of government measures to curb home-backed loans and snowballing household debt had forced borrowers to take out high-rate loans.

Concern is growing that the jump in the proportion of high-rate loans will likely aggravate the country's household debt problem, a perennial bugbear for policymakers.

Analysts said there is a high possibility that commercial lenders may jack up lending rates down the road following the central bank's rate raise.

According to the latest BOK tally, South Korea's household debt hovers above 1,400 trillion won (US$1.29 trillion), which remains a time bomb for Asia's fourth-largest economy.

Meanwhile, the ratio of bank loans with an annual interest rate of less than 3 percent came to 29.1 percent of their total lending in September and 24.7 percent in October, according to the central bank data.
(END)