The meeting between the floor leaders of the three political parties came after the opposition-led parliament missed the legal deadline to pass the government budget bill, which fell on Saturday.

National Assembly Speaker Chung Sye-kyun has extended the budget session to Monday for now. Whether a plenary session will be held to vote on the spending bill largely depended on the outcome of the meeting between the floor leaders. They are Woo Won-shik of the ruling Democratic Party, Chung Woo-taik of the main opposition Liberty Korea Party and Kim Dong-cheol of the liberal People's Party. 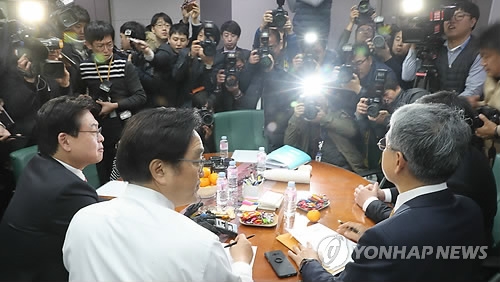 The parties largely remained apart over a government plan to greatly increase the number of public employees by up to 12,000 in 2018 alone. The move comes as part of the new Moon Jae-in administration's bold plan to hike the number by 810,000 over the next four years before its single five-year term ends in May 2022.

The main opposition party strongly insists the number must be limited to an annual average of around 7,000 while the ruling party refuses to budge from its own lower limit of 10,500.

The People's Party says around 8,000 to 9,000 in new government employees should be sufficient. The minor opposition Bareun Party too has stated its opposition to increasing the number public workers by any greater number than a few thousand a year, saying a sudden rise in the number will continue to send ripples throughout the local economy for years to come.

The Bareun Party was not represented in the three-way meeting as only those with more than 20 parliamentary seats are recognized as floor negotiation bodies. The splinter conservative party currently controls 11 seats, with the progressive Justice Party holding six parliamentary seats. The ruling party has 121 seats while the main opposition party controls 116.

Another point of contention was a proposed hike in corporate tax rates.

The government and the ruling party are seeking to increase the corporate tax rate for businesses with taxable profit of more than 200 billion won (US$183.8 million) to 25 percent from the current 22 percent.

The main opposition party has tabled a counterproposal that would increase the rate to only 23 percent, while lowering the rate for companies with less than 200 million won in taxable income to 8 percent from the current 10 percent.