Choi Jong-ku, chairman of the Financial Services Commission (FSC), made the remarks at a meeting with young entrepreneurs of startups, days after the government unveiled fresh measures to support them in emerging industries.

Banks and other financial institutions should cut red tape and make their risk assessment systems more efficient amid some criticism that their aversion to risk culture has often frustrated young entrepreneurs, Choi said. 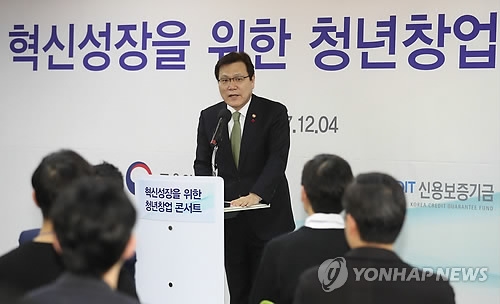 "The duty of the financial sector is to make efforts to work on solutions by listening to voices of people who are struggling to launch startups," Choi said.

Last week, the government said it will set up a state investment fund worth 4 trillion won (US$3.7 billion) in 2018 for startups.

To promote venture capital funding, the lifeblood of technology startups, by the private sector, the government plans to ease some regulations on investment.

The government will also soften restrictions for private investors so startups can easily raise funds.
(END)