The South-North Sports Exchange Association said that South and North Korea will compete at an international under-15 football tournament that will be staged in Kunming, China, from Dec. 19 to 22. The two Koreas and China will send two teams each to the tournament. They'll be first divided into two groups, and the top two teams from each group will enter the knockout stage.

This is the third edition of the youth football tournament that is also known as the "Ari Sports Cup." The inaugural event was hosted by Yeoncheon County in the South's Gyeonggi Province in 2014 featuring six teams from four nations. The second edition was staged in Pyongyang in August last year with eight teams from six countries.

The football event was canceled last year following the heightened tension between the two Koreas.

This year, South Korea will be represented by two teams from Gangwon Province. The South will send a group of 60 players and officials to China on Dec. 13. North Korean teams have been in Kunming since Saturday.

Gangwon Gov. Choi Moon-soon said it's meaningful that the two Koreas decided to participate in the tournament despite the current situation on the Korean Peninsula. North Korea last week test-fired an intercontinental ballistic missile and triggered another strong condemnation from the international community. 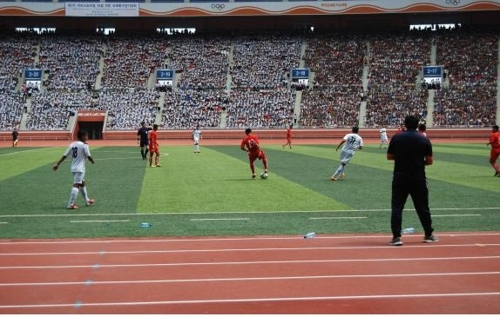 Koreas to meet at youth football tournament in China

Koreas to meet at youth football tournament in China